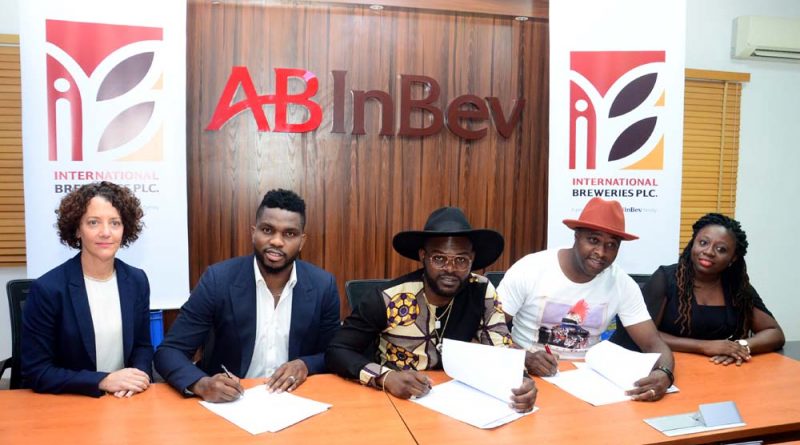 Trophy lager, a leading quality beer brand and one of the national treasures from the stable of International Breweries Plc has kicked-off a football tournament for lovers of Trophy beer called ‘Trophy 5-a-side Field of Honour’.

The launch, which took place at the Fun Turf in Lekki on Tuesday marks the beginning of a 10-week long football tournament organised by International Breweries, makers of Trophy lager. The maiden edition of this event is expected to cover four states: Lagos, Ogun, Osun and Oyo States with the team recruitment. While the super fans of Trophy Lager beer will be selected nationwide. After the knock-out stages which will hold in all participating states, the semi-finals and finals will take place in Lagos State. The winning team will go away with N3 million and qualify for the all expense paid ‘Africa 5 tournament’ regional finals in Tanzania.

The football matches are open to all customers of Trophy Lager beer. Interested players will be recruited as 10-man teams through accredited bars across the four states. Details of participation are available in major bars. The tournament will kick-off with the teams representing their communities in a round-robin stage, after which winners will proceed to the knock out stages. The 10-week-long campaign will produce a final winner by May 12, 2019.

In her remarks, BU President – West Africa, International Breweries Annabelle Degroot, said, “At International Breweries we put our customers first and strive to give them all round value whether in an experiential manner or otherwise. That is why we are happy that the Trophy 5-a-side Field of Honour tournament will resonate well with our people who are also football lovers.”

Shedding more light on the tournament, Marketing Director, International Breweries, Mrs Tolu Adedeji, said, “We all know that Nigeria is a football-loving nation and the Trophy 5-a-side Field of Honour campaign is not just another soccer tournament. It is designed to create an opportunity for our customers to celebrate and represent their communities.” She added that the unique tournament is also “designed to tap into the passion many Nigerians have for soccer as they enjoy the beer they love.”

Adedeji added, “Aside from taking home the winning prize of N3 million, the winning team will be meeting Samuel Eto’o, the renowned African football superstar, and also have bragging rights as the best 5-a-side football team and an opportunity to participate in the continental finals taking place in Tanzania later this year.”

The teams will be selected via in-bar recruitments. Although this first edition is happening in four states, fans will also be recruited across the country. Football loving Trophy customers will be recruited as ‘Super-fans’ across the country via weekly questions and sweepstakes thereby availing customers outside the four states, the unique opportunity to participate in the tournament as fans. Kindly follow our social media pages to get updated on this live.

In addition to the grand prize of N3 million, winners at the knock-out stages will also cart home various consolation prizes and memorabilia, in appreciation for their participation.

Ex-Super Eagles captain Joseph Yobo was unveiled as the campaign ambassador. Folarin Falana (Falz the Bahd Guy), will be joining Femi Adebayo as ambassadors for Trophy lager. Yobo has had a distinguished career as a professional football player, and his knowledge and experience will be very pivotal to his role as an Ambassador of the unique Trophy 5-a-side Tournament.

The choice of Falz the Bahd Guy, as a Trophy Ambassador, added Adedeji, was deliberate as both Falz and Trophy represent bringing honour to Naija. Especially as Trophy, only recently, celebrated 40 years of facilitating goodwill, honour and celebration

The highpoint of the launch was the novelty match between IB Plc team and Sports Writers Association of Nigeria (Lagos SWAN) team. The game ended 2-2.