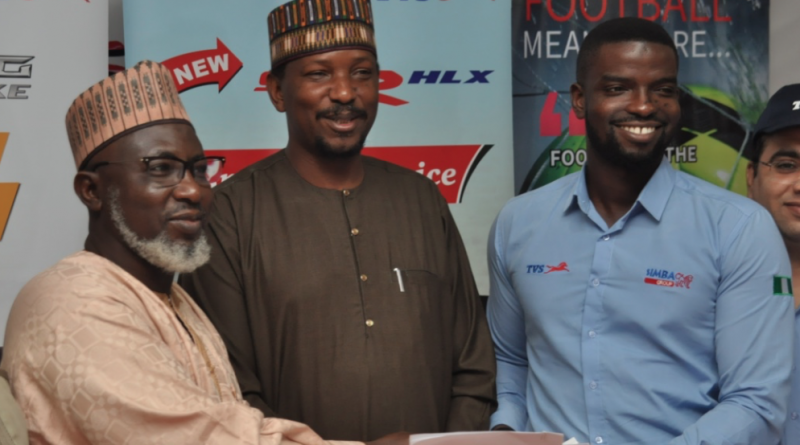 The Nigeria Football Federation on Monday in Abuja signed an agreement with the Simba Group, to make TVS the Official Motorcycle and Tricycle Partner of the Super Eagles.

NFF Second Vice President/LMC Chairman Shehu Dikko represented the NFF President, Amaju Melvin Pinnick, at the ceremony, and explained that the two-year agreement fits into the frame of the present NFF administration’s commitment to legacy contracts that will benefit Nigerian Football beyond the tenure of the current office bearers.

He said, “We are partnering with the Simba Group with the objective of truly taking football to the grassroots. Scores of millions of football-passionate Nigerians use the motorcycle and the tricycle, and this is a conscious effort to reach them with the message they love so much.

“It is a two-year agreement, but our delight is that the Simba Group have committed to actively driving the engagement and promotion of the game at the grassroots. In return, they will have access to our programs and can also use the images of our National Team players on their cycles.”

Dikko also noted that the union was in line with the vision of the present NFF team to bring on board partners from critical sectors whose activities can impact positively on the programs and activities of the Federation and those of the various national teams.

NFF General Secretary, Dr. Mohammed Sanusi commended the Simba Group for seeing a window through which they could partner with Nigerian football and grabbing the opportunity, while pledging that the NFF will abide by every letter of the contract.