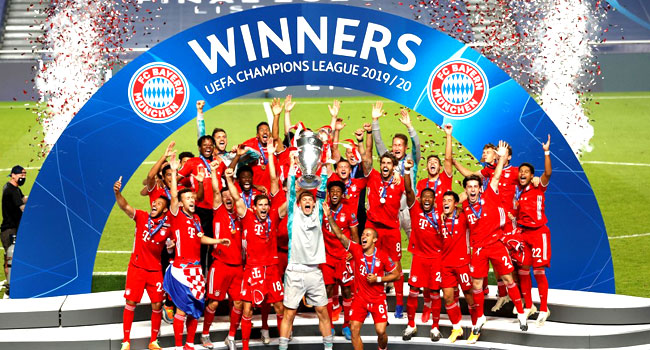 Kingsley Coman dealt his former club Paris Saint-Germain a heavy blow as his second-half header guided Bayern Munich to a 1-0 victory in the Champions League final in Lisbon.

The Frenchman was Bayern’s only pre-match change from the semi-final victory over Lyon and vindicated his inclusion on the hour when he headed the winner as the champions of Germany overcame their French counterparts to clinch their sixth European crown.

It was a moment to savour for Bayern and their manager Hansi Flick, who having been installed as interim boss in November, won the trophy he came so close winning as a player in 1987 to complete a Bundesliga, DFB Pokal and Champions League treble for only the second time in the club’s history.

And Bayern’s return to the summit of European football was further underlined by the fact they became the first team in Champions League/European Cup history to win all of their matches en route to lifting the trophy.

For Thomas Tuchel and PSG, it was agonising failure at the final hurdle as the expensive stars brought to the club to win this very competition – Neymar and Kylian Mbappe – spurned chances and failed to inspire the French champions on European football’s biggest stage.