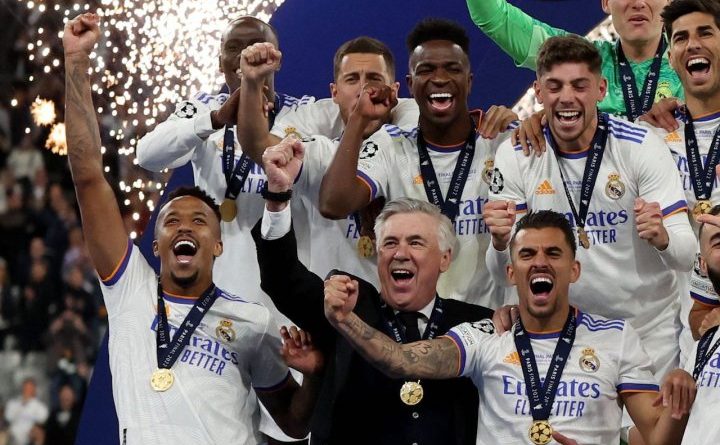 AFTER a 63-match marathon, and on a night of chaos and heartache in Paris, Liverpool’s incredible season ended in a cruel defeat.

For the second successive weekend, Jurgen Klopp’s men were denied a trophy in agonising fashion – a second-half sucker-punch from Vinicius Junior and a wonder show from Real keeper Thibaut Courtois robbing them of victory.

Thesun.co.uk reports that Liverpool fans had been pepper-sprayed and tear-gassed as kick-off was delayed by more than half an hour by shambolic organisation outside the Stade de France.

And just six days after Manchester City’s comeback against Aston Villa robbed them of the Premier League title, Liverpool were pipped again.

After chasing an unprecedented quadruple for so long, Liverpool end up with ‘just’ two domestic Cups – and both of those won on penalties after goalless draws.

And Real, with 14 triumphs, now boast twice as many successes in this competition as any other club.

It can be argued that they did not deserve to defeat Chelsea in the quarter-finals or Manchester City in the semis and they were certainly second-best here.

But with their experience, their cunning and the sheer weight of their history, Real almost always seem to find a way.

Those Liverpool fans had travelled in their legions by trains, planes and ferries, taking over vast swathes of the French capital with their ‘ole, ole, oles’.

Some had witnessed Liverpool’s triumph in the same city, against the same opposition in 1981, and others in Rome and London and Istanbul and Madrid yet with European Cup Finals it always feels as exciting as the first time.

But there were indications of organisational chaos hours before kick-off time.

Liverpool’s team bus was held up in heavy traffic and there were chaotic scenes near the entrances to the Stade de France.

With fans complaining of shambolic organisation and a risk of crushing outside, it was unsurprising when UEFA announced a delay to kick-off

With a newly-laid pitch also causing controversy, it felt as if this fixture had been switched from St Petersburg just days, rather than months, ago.

The kick-off was pushed back by 15 minutes, then half an hour, then to 36 minutes.

And the ‘opening ceremony’ commenced with thousands still desperately trying to get inside – the dancers booed and jeered as they did their unnecessary thing.