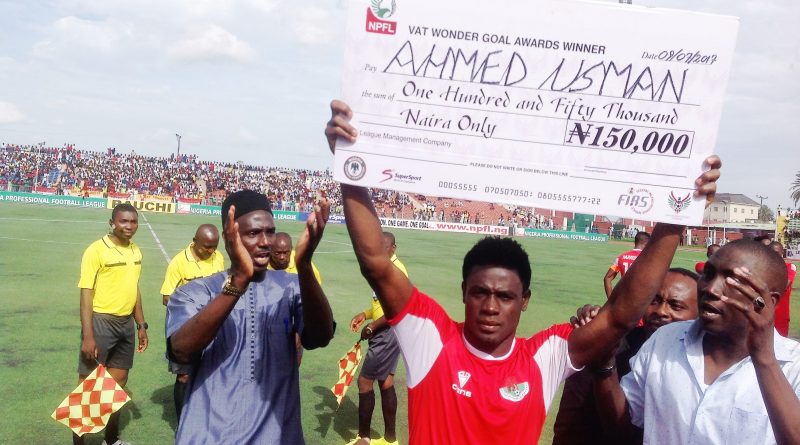 Ahmed Usman, a former Almajiri (street kid) who won the Nigeria Professional Football League (NPFL) Match Day 24 VAT Wonder Goal award has nominated to a Youth Rehabilitation Centre in Bauchi as his preferred charity, reports Extrasportsnigeria.com. He then described the award as the high point of his season at Wikki Tourists. The player popularly called Manu expressed the hope that the recognition would motivate him to achieve more in his career.

In line with the charity theme of the award instituted by the League Management Company (LMC) the player nominated Mallam Kawu Youth Rehabilitation and Orphanage Centre in Bauchi to be the beneficiary of 50 percent of the prize money.

“I chose Mallam Kawu because it is a centre that gives the orphans the Almajiri system of education. I was an Almajiri myself and this is why I still identify with them. I hope my donation will help take care of those orphans,”Ahmed told www.npfl.ng

It has been a long lane to honours for Ahmed whose football path has led him through local clubs in Bauchi including Zabgai FC and Yankari FC but he reserved a huge appreciation for Wikki’s new coach, Bala Nikiyu for granting him more playing time on the pitch than he had ever had previously.

Ahmed has four goals to his name so far this term but the Match Day 24 goal against Niger Tornadoes in a 3-1 win for the Tourists has had him in national focus and the player said shortly after the ceremonial presentation of the N150, 000 prize money the goal which was his second of the season will mark the beginning for more.

“I feel so happy for winning the VAT Wonder goal award. That was my second goal of the season and I hope it will be the beginning of good things to come for me as a player” said Usman who had since doubled that tally in four other games.