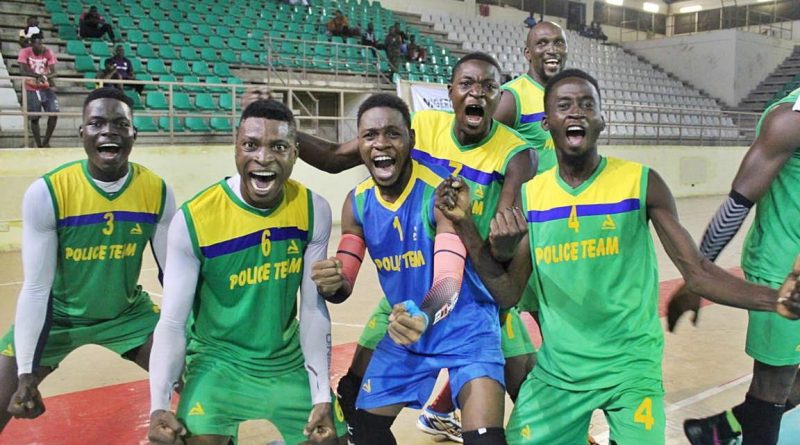 Nigeria Security and Civil Defense Corps (NSCDC) suffered its second defeat in the hands of Nigeria Police on Day 3 of the ongoing Nigeria Premier Volleyball League in Abuja, Extrasportsnigeria.com reports.

Nigeria Police led comfortably in the first set before NSCDC caught up after several service faults leading to NSCDC eventually winning by 31-29 points. In the second set, Police came out smoking hot beating NSCDC 25-16 points all thanks to Obayemi Ogunshina’s spikes and blocks from Taraba Army. The combo of David Akinbo, Ibrahim Adamu and Emmanuel Jatto gave NSCDC victory on the third set by 25-23 points. The table turned in the fourth set as Police came from behind to win 25-23 points. In the fifth set, Nigeria Police took charge and Ogunshina won the last point for Police as they won 15-9 after an intensive match.

The Most Valuable Player, Obayemi Ogunshina said the win against former champion, NSCDC is a morale booster adding that Super Force is not a pushover.

Ogunshina said, “Before the commencement of the game, the target was to beat the NSCDC 3-0 major scores but we had to struggle in the first and third set. All the same, Police Force eventually beat NSCDC in the cracker and this means a lot to the team and the coaches.

“In our first game, we beat UCEM 3-0 and now NSCDC 3-2, this will serve as a morale booster and other teams in the league should watch out because we are not pushovers.”

The assistant coach of Nigeria Customs, Priscilla Agera told newsmen that the mission of the team is to retain their title.