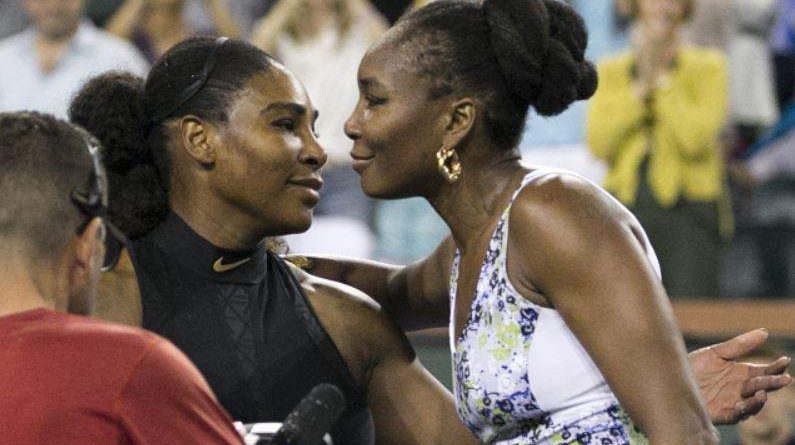 Venus Williams defeated younger sister Serena 6-3, 6-4 in the third round of the BNP Paribas Open on Monday night, her first win in the sibling rivalry since 2014.

It was the sisters’ earliest meeting since a 17-year-old Venus beat 16-year-old Serena in the second round of the 1998 Australian Open. They played Monday night for the first time since last year’s Australian Open final, when a pregnant Serena won her 23rd Grand Slam title.

“I’m just lucky that I’ve played more matches than her right now,” Venus said on court afterward. “She just came roaring back. I had chances for the match to be over, but it wasn’t.”

Venus broke Serena at love in the sixth game for a 4-2 lead in the first set. She emphatically closed out the 36-minute set with back-to-back aces that clocked 108 mph and 120 mph.

“I definitely know her well, but she definitely played a little bit better than she normally does,” Serena said. “She served very consistently. She just did everything great.”

Venus faced two break points in the next game, but got bailed out on Serena’s two consecutive forehand errors to get to deuce. Venus hung on from there to end their 29th meeting.

“Missing shots that I never miss, and so close,” Serena said. “At least they’re in the margin. I’m getting there. It’s not exactly where I want to be, but I’ll get there eventually.”

“I really abhor every time we play, but I do enjoy the battle when I’m out there,” Serena said last weekend. “It’s just afterwards I don’t like it as much.”

It was obvious at the net when they greeted each other with a one-arm hug and neither smiled. Venus did her usual victory pirouette, but still didn’t smile.

A stone-faced Serena exited the court to cheers, pointing her right index finger in the air.

Serena was back on the WTA Tour for the first time since ending a 14-month absence during which she gave birth to daughter Alexis Jr. and married Reddit co-founder Alexis Ohanian, who sat courtside.

The Indian Wells match was 17 years in the making.

The sisters were supposed to play each other in the desert in 2001. A packed stadium awaited their semi-final but shortly before the match was to begin Venus withdrew with a right knee injury.

Serena went on to play Kim Clijsters in the final. Venus and her father Richard were greeted with boos as they made their way to their seats, with some fans believing Richard had been behind Venus’ withdrawal.

Richard Williams said he heard racial slurs from the crowd and he paused to shake his fist at them. Serena was booed throughout the final before she beat Clijsters in three sets for her second title in the desert.

After that, the sisters boycotted Indian Wells for 14 years. Serena came back in 2015 only to withdraw with a knee injury before her semi-final, and Venus followed the next year.

Both sisters have been greeted warmly by fans each time they’ve played here since that turbulent time.