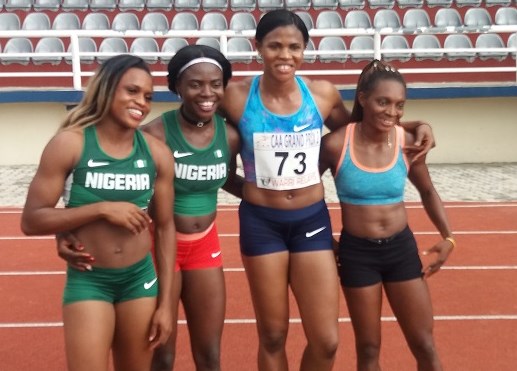 Blessing Okagbare and Ogho-Oghene Egwero both inspired Team Nigeria to victories in the 4X100m relays event at the 2017 Warri Relays & CAA Grand Prix held on Tuesday. The event is holding at the main bowl of the Delta State Polytechnic, Ozoro.

While Okagbare led the female team to a comfortable win in a time of 43.92secs, the men’s team were stretched by the Botswana quartet who came to Ozoro with the aim of getting a qualifying time for the World Championships in London.

There was more to celebrate for Nigeria in the women’s 100 Hurdles event as US based Tobiloba Amusan continued her impressive run this season, winning the race in a time of 12.97secs while Grace Ayemoba finished second in a time of 13.53secs and Efe Favour third in 13.63secs.

In the Men’s 100m men, Egwero came first as he clocked 10.33secs; Keene Motukisi in second position in 10.41secs and Harry Chukwudike 10.47secs in third position.

Isoken Igbinosun finished ahead of national champions, Aniekeme Alphonsus, in women’s 100m as she posted a time of 11.49secs. Alphonsus crossed the line in 11.51secs and Ntia Obong Mercy in 11.66secs.

Ihekandu Philomena and Oluchi Offoma settled for 2nd and 3rd sport respectively with a time of 2.12.17 and 2.12.20 respectively.

In the 110 Hurdles for men, Martins Ogieriakhi who few days ago won the national title followed up with another winning performance as he breasted the tape in a time of 13.82secs ahead of Abejoye Oyeniyi and Bashiru Abuduliahi who picked second and third spot.

For the 400m Women’s event it was a good day for Yinka Ajayi who not only won the race but also registered a new personal best time of 51.30secs

Abike Ebegniyi and Folashade Olotu were relegated to 2nd and 3rd spot having finished their races in 52.03 and 56.83secs respectively.

Meanwhile, Kelechi Nwanaga on Tuesday broke a 15-year national record in women’s javelin throw, with her 58.15m throw in Ozoro.

The previous record of 55.30 was created by Sorochukwu Ihuefo in 2002.

Nwanaga’s new feat has yet to be officially ratified by the Athletics Federation of Nigeria.