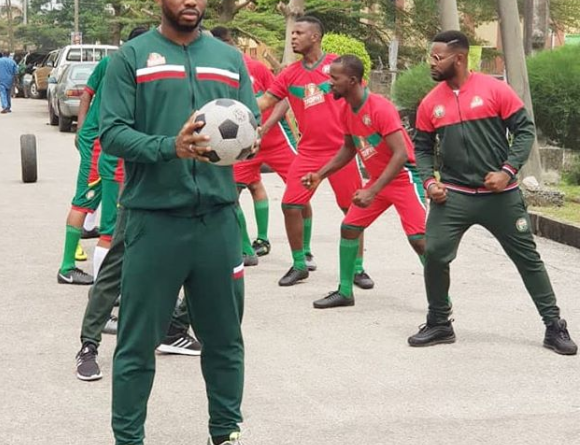 Joseph Yobo ex-Nigeria international and a former captain of the Super Eagles but still very much involved in youth development and community projects. He is an ambassador for Trophy 5-a-side football tournament and is excited about International Breweries PLC’s involvement in building grassroots football

As an ex-international, what informed your decision to be part of a grass-root 5-a-side football tournament?

Trophy came calling I looked at the objective of the competition and decided that it is in line with my vision of giving back to my community and country especially as it concerns football youth development.

You are the ambassador for this campaign; do you have plans to be involved in other football programmes at the end of this tournament?

Yes I am a football ambassador first foremost and will support initiates around it especially any initiative having to do with development of our youths. You know I am currently an analyst on SuperSport.

What would you say about grassroots football in Nigeria?

It’s still in its infancy and it needs corporate sponsorship just like what Trophy is doing to drive and take it forward.

What can you say about an organization like IB hosting a football tournament?

It’s wonderful. It is a great thing to do and we should all encourage it.

What is your take on privatizing the management of football in general?

Football is good business judging from what is happening overseas. It is therefore long overdue, so long as the privatizers see it as a long term investment.

Do you think that a solid football league can impact the economy of the country?

Why not look at what is happening in Europe. It can contribute immensely to the GDP and is more than enough to diversify our source of income in Nigeria.

Can you relate your journey into football stardom with what International Breweries is doing with the 5-a-side tournament?

Of course, I started young from the grassroots in Port Harcourt from where I rose to the pinnacle of my career Europe. You can see the synergy given that these young players would eventually go to Tanzania and can eventually become the bedrock of our national team in the future.

Do you think many more organizations should emulate IB in growing our local football?

Do you think that football can play a major role in the elimination of serious unemployment and youth restlessness in our environment?

Of course just like I said earlier, football is big business and players would be employed, trained and even ancillary would not be left out.

Do you think there are other things aside from being involved in the actual play that can help grow the industry?

Yes, there is the technical part, the social and also the merchandising part and whole lot more.