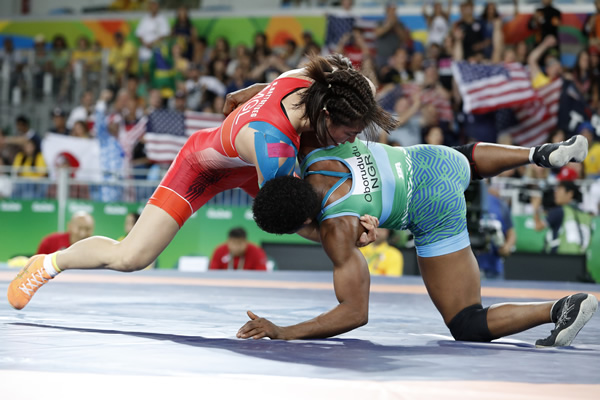 The Nigeria Wrestling Federation (NWF) members say their ultimate goal is to produce wrestling teams that always aspire for the biggest honours on the floor and be the best whenever they are host, Extrasportsnigeria.com reports. And to underline these goals, they have outlined the forthcoming Commonwealth Wrestling Championship in South Africa; the 2017 Governor Wike championship slated for November and next year’s African Senior Championships and the Commonwealth Games in Australia as the major focus of the board for now.
At the board meeting in Abuja, the President of the federation, Daniel Igali urged members to be ready for the task ahead which he believes will re-position the sport for growth in the country.
The hosting right of the African Senior Championships to Nigeria was announced in Paris, France on August 18 during the World Championships. It will be staged in Port Harcourt and the Rivers State Government has agreed to sponsor and provide the required support that will make it a success story.
Also, the Governor Wike Championship will be held in November and the NWF board says, “It is a wrestling meet that will be used to test facilities, prepare Nigerian wrestlers and serve as qualifiers for the African Championship in February 2018.
“About 90 wrestlers are expected to represent the country at the championship, comprising ten weight classes in each of the wrestling styles (Greco-Roman, female and freestyle) and in each of the categories (cadet, junior and senior).”
The federation praised Wike for his magnanimity in agreeing to sponsor both events and hopes that other states would emulate and support the sport nationwide.
The praises were also extended to Nigerian wrestlers for their efforts and achievements at the last World Championships in France. Odunayo Adekuoroye won a silver medal and it is the best result the country has ever achieved at the championships.
At the meeting, the board also approved the appointment of ENP Projects Nigeria as the official marketer of the federation. The duty of the marketers as explained by the federation President is to help source for funds for numerous programmes and build the brand.
Other resolutions reached at the meeting were the re-appointment of Sir Damien Ohaike as the Technical Director of the Federation and the co-option of Group Capt. Murtala Abdul-Loko, Brig. Gen. U. O Olatoye and Mr. Nnaemeka Magnus Edeh as board members of Nigeria wrestling Federation (NWF).