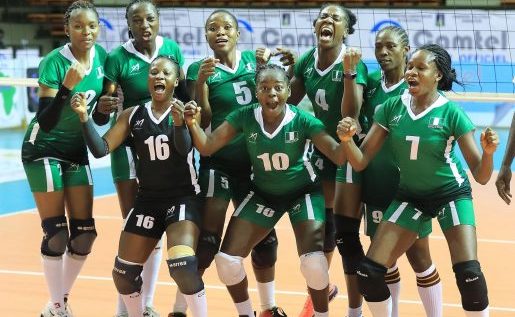 The Coach of the Nigeria senior women’s volleyball team, Samuel Ajayi has said he wants to make history by qualifying the team for the Tokyo 2020 Olympics.

Nigeria will compete alongside Egypt, Kenya, Botswana and host Cameroon from Thursday, 2nd January to 10th for the sole ticket.

The team left Wednesday with twelve players, two coaches, the Secretary General and one referee.

The coach is also the NSCDC manager, is confident that the players assembled will live up to expectations.

He said, “Nigeria is going to the qualifiers not for vacation but serious business. This current team wants to make history by qualifying for the first ever Olympics.

“If you look at the final list, you will see that the team is filled up with players who performed well at the 2019 Nigeria Volleyball Premier League and I am confident that they will live up to expectation by picking the sole ticket.”

He then added, “The players resumed camping in the first week of December and since then have undergone rigorous and technical trainings. The team also reflected on the performance at the 2019 African Games and worked on some little flaws noticed.

“The team has the combination of top players from top clubs in the country including the Most Valuable Player, Ijeoma Ukpabi; the best spiker, Albertina Francis; best setter, Sharon Achi; best defender, Jummai Bitrus and others.”

The NSCDC gaffer said, “The NVBF President, Engineer Musa Nimrod has not stopped supporting us. If not for his tremendous support, it would have been almost impossible to participate. Since he came on board few years ago, Volleyball has been on the rise and at a different level completely.

The final list comprises 10 home based and two foreign based players.