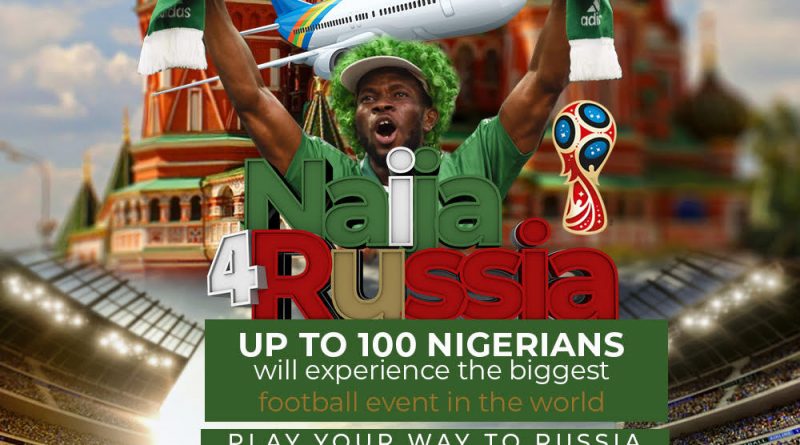 The NFF’s campaign to take 100 Nigerian football fans to Russia to support the Super Eagles at the 21st FIFA World Cup finals is now live.

To win a ticket to go to Russia, Nigerian football fans only need to dial *1945# on their phones or send “FLY” to 1945 and follow the instructions.

It will be recalled that in December 2017 in Lagos, the NFF and STA Mobile launched the short code, to be used for all campaigns that are geared towards Nigeria’s preparation and participation at the 2018 FIFA World Cup finals in Russia.

With the campaign now live on the NFF social media platforms (Twitter: @TheNFF and @NGSuperEagles); (Instagram: @thenffofficial); (NFF Facebook page: The Nigeria Football Federation) and; (Super Eagles Facebook page: Nigeria Super Eagles), football fans can now go and play or text their way to Russia. Details of how to play are available on the NFF media platforms as well as www.1945play.ng.

In explaining the idea behind the short code, STA Managing Director Biodun Jagun said the plan is for a total of 100 fans of the Super Eagles to win all –expenses paid trip to the 2018 FIFA World Cup finals, in four tranches of 25 people-a-month.

“The deployment of this iconic short code *1945# across USSD, IVR, SMS AND WEB platforms is designed to reward the teeming National Team followers and football lovers across the country with a chance to cheer our footballing heroes live in Russia as they take on the best teams from across the globe. As an addendum we are focused on ensuring the generation of appreciable revenue for the NFF and its constituents,” Jagun explained.

NFF First Vice President/Chairman of the NFF Legal Committee, Barrister Seyi Akinwunmi, assured the gathering at the launch that all necessary legal permits have been obtained to run the programme.

The campaign is powered by Secure and Trusted Alliance Services Limited.