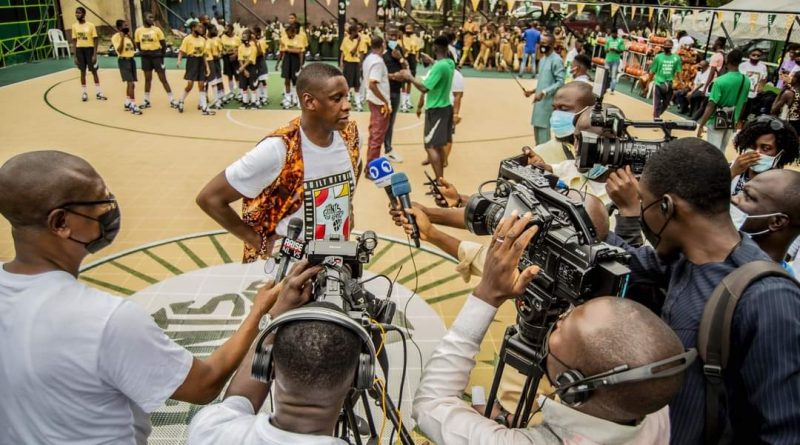 Vice-chairman and President of the Toronto Raptors Masai Ujiri and his foundation, the Giants of Africa have completed the first phase of multiyear, 100-court investment in the infrastructure of basketball throughout Africa. This first phase saw the former Nigeria’s D’Tigers star donating 10 courts to various schools and communities in different places in Africa.

Masai who just returned to Toronto after the last stop with his team in Burkina Faso said the entire stretch of journey was all good.

“Yes, I’m back to base and I can happily say it was good and worth all the work put in,” Masai said in a telephone conversation from Toronto.

Before he boarded the flight to the North American city, the NBA top shot admonished Nigerian and indeed African youths to dream big and follow up their goals.

Masai said, “It’s okay to dream and it’s very okay to dream big. We can start from somewhere and grow very big. That first step matters a lot. We have to visualize ourselves doing great things; chase the dream passionately with good discipline.

“I dreamt of being an NBA star but I was never good enough for that level of competition. I only managed to play in a few leagues in Europe and few times with D’Tigers but I used the opportunity to target the NBA in a different way. I started as a scout moving around the places but today I have moved up.

“I keep telling these young ones that not everyone will end up as great basketball players but you can use this game and the exposure as a launch pad for other things. In these young ones I see doctors, engineers, great teachers and nurses.”

The Toronto Raptors President said he is so proud to have Precious Achiuwa star now for the Raptors just few years of being a camper with the Giants of Africa.

“You can see how the circle has been completed who would have thought that Precious would be in an NBA team about six after learning with other kids in Nigeria?”

For the first phase in Nigeria Ijeshatedo Senior Secondary School, Ilupeju Junior Grammar School, Oworosonki Park and the Warriors Basketball courts were unveiled.  The Warriors got an extra court for their junior team. These ceremonies were livened up by the cultural displays by the pupils; their enthusiasm to play on the new courts was quite touching.

The physical investment in the continent continues the Giants of Africa Foundation’s commitment to creating opportunity for youth in Africa through sports, and harnessing the power of the next generation to propel the continent forward.

Under the organization’s “Built Within” initiative, over ten new court builds and refurbishments were unveiled across locations in Nigeria, Kenya, Tanzania, Ivory Coast and Burkina Faso. The remaining will be unveiled in years to come, and will be strategically located in underserved communities.

Empowered by the impact the game has had on his own journey, Ujiri co-founded Giants of Africa with aspirations to leverage basketball as a vessel for young boys and girls to Dream Big, and visualize opportunities for their future in Africa and around the world. Since its 2003 launch in Nigeria, the not-for-profit organization has expanded its footprint and programming across the continent and beyond the game. The organization has prioritized skills training and personal development from basketball, health and wellness, to leadership and social impact.

“These public spaces have the power to unite communities, build togetherness and improve quality of life for all people.”

The participating pupils and young players and staff at all the centres received free basketball gear provided by Nike. Basketball clinics were conducted by NBA coaches and personnel including Jama Mahlalela, Patrick Engelbrecht, Patrick Mutombo, Sarah Chan, Godwin Owinje and Joe Touomou to close out each event.

The new courts were built in partnership with Sport Court International, LLC, a pioneer in the concept of backyard modular sports surfaces.

MasterCard foundation is supporting this year’s efforts along with I AM GOLD, who will be contributing to this initiative over the coming years.