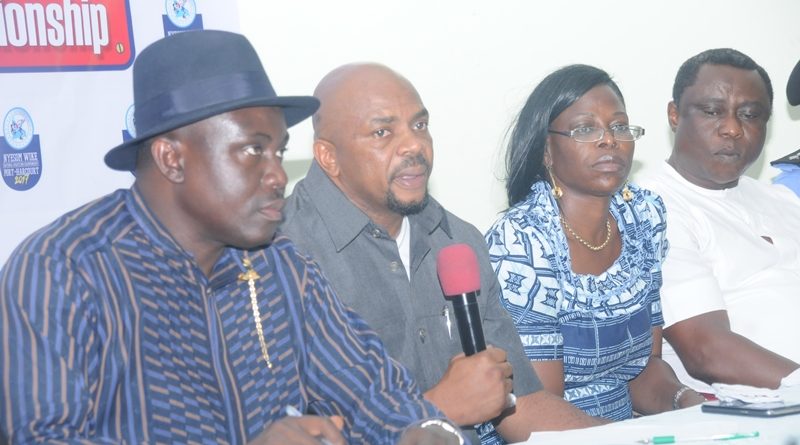 It has been confirmed that no fewer than 270 medals are up for grabs at the maiden edition of Governor Nyesom Wike National Wrestling championship billed for Port Harcourt from November 23 to 30.

This was disclosed at a press briefing held in Port Harcourt by the Local Organizing Committee (LOC) headed by the Rivers State Commissioner for Sports, Boma Iyaye, alongside other members of the committee.

He said no fewer than 600 wrestlers from 24 states have so far registered to compete for honours, while more states were expected before the deadline for registration.

The LOC chairman added that Rivers was not just hosting, but prepared to do battle, as no less than 90 wrestlers from the state would be seeking for honours on the podium.

He stressed that adequate arrangements have been made for security, adding that the state has hosted numerous events in the last two years without a single security being recorded.

Also speaking, the Alternate Chairman of the Media/Publicity Sub-Committee, Honour Sirawoo, who read the schedule of programme, stated that the LOC had made necessary arrangement for a hitch-free championship, stating that Rivers had always hosted credible events.

Sirawoo, who is also the President of Sports Writers Association of Nigeria (SWAN), said wrestlers and members of the public are assured of good time through the championship.

On the issue of doping, the chairman of the Medical subcommittee and Rivers Commissioner for Health, Professor Princewill Chike said appropriate medical facilities have been put in place to checkmate drug cheats and other medical issues.

Teams and technical officials are expected to arrive on the November 23, while the challenge commences on November 26. The official opening and unveiling of logo for the 2018 African Wrestling Championship is scheduled for November 27.