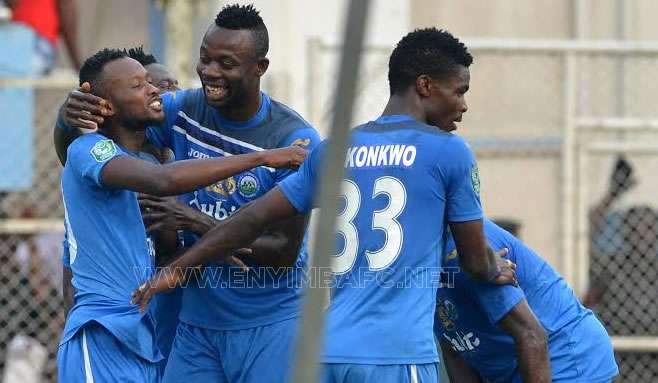 Rangers of Enugu started the defence of their Nigerian league title on wrong footing. They lost their opening game 2-1 to rivals Abia Warriors at the Nnamdi Azikwe Stadium.

Fortune Omoniwari had given the champions the lead in the 10th minute before the Warriors equalised 12 minutes later through Emeka Isaac. Godwin Zaki converted a penalty 18 minutes from time to hand Okey Emordi’s side the win.

Shooting Stars Sports Club of Ibadan handed visiting Lobi Stars a 2-0 defeat. Afolabi Waheed put the hosts ahead on 22 minutes, while substitute Sunday Faleye scored with his first touch in the 66th minute.

In Calabar former African champions Enyimba began their campaign on a winning note. They defeated Sunshine Stars 1-0 at their adopted home ground, the UJ Esuene Stadium, Calabar. Ibrahim Mustapha scored the only goal of the match.

ABS extended their unbeaten record against Akwa United to four by beating them 3-1 at the Kwara Stadium Complex. The home side got off to a good start with Mohammed Mohammed handing them the lead in the 12th minute. Godspower Igudia however equalised for the away side seven minutes later.

Stone Evbuomwan and Abubakar Chindo struck in the 30th and 65th minutes to hand the newcomers victory.

In Port Harcourt, Rivers United defeated El-Kanemi Warriors 2-1 in a match played at the Yakubu Gowon Stadium. Ivorian forward Guy Kuemian scored the opening goal in the 26th minute and they added to the lead at close to the end of the game but Bello Kofarmata however ensured a nervy end to the game when he pulled a goal back for the visitors in the 91st minute.