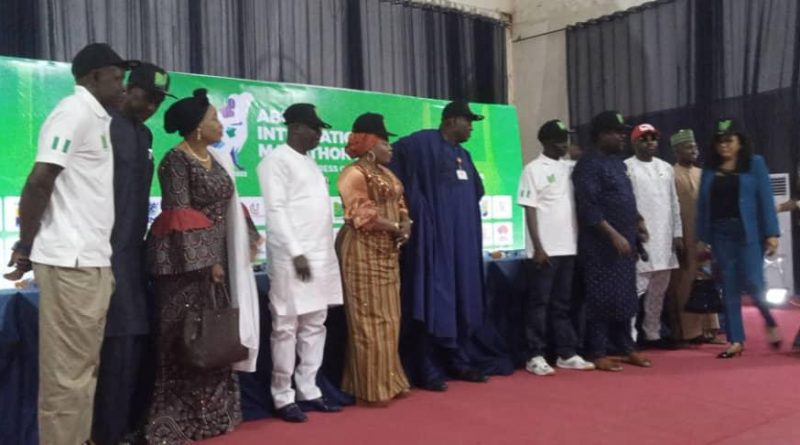 After three years of planning, the stage is now set for the first edition of the Abuja International Marathon (AIM).

At a press conference on Thursday in the Federal Capital Territory, FCT Abuja, AIM’s Managing Director Zsuzsanna Ogunmiloyo said that the first edition of the much-anticipated race will be taking place on December 17, 2022.

Ogunmiloyo who is also CEO, of Unicentral Resources said she is delighted the Abuja International Marathon is finally moving away from being an idea into reality.

She said: “The journey to the first international marathon in our great city, Abuja, begins today. I am appealing to all residents of FCT and Nigerians, in general, to join hands with Unicentral to ensure we have a world-class race that will sell FCT and Nigeria to the world as a tourist destination, a place to invest and do business.

“With the cooperation of every one of us, especially the sporting press the number one stakeholder in this project we can build a race that will rival the best in the world like New York and London in record time” the MD, Abuja International Marathon added.

On his part, Senator Ayo Akinyelure representing Ondo Central Senatorial District reiterated the Abuja Marathon as a fully-backed government project that already enjoys the approval of the National Assembly.

Akinyelure noted that an initiative like the AIM which is guaranteed to raise the profile of Abuja as a city and Nigeria as a whole will be nurtured into a world-class event.

“This is another worthy addition to the laudable achievements of the Minister of FCT and Minister of State, this project will definitely enhance the image of FCT and Nigeria as a whole, we are .enthusiastic about it and fully behind it” Senator Akinyelure affirmed.

Lucas Istafanus, Director of Sports FCT said they are equally excited about the project and would give Unicentral all the support they need for a world-class event.

On his part, the Project Coordinator Femi Abegunde thanked the FCT Minister and the Minister of State for their support.

Abegunde noted that up until now, Abuja was the only capital city in Africa with no international marathon of its own but with the support of the two ministers and other stakeholders, that blemish has been removed.

Abegunde enjoined the friends of the FCT and Corporate Nigeria as a whole to key into the Abuja International Marathon.

The Director of Communication and Media Olukayode Thomas thanked the sporting press for the warm reception they have given to the Abuja International Marathon even as he admits they are the biggest stakeholders.

Thomas revealed that one of the innovations the AIM will be bringing media awards in order raise the bar of sports reporting in Nigeria.

“There will be a competitive media award that will offer premium prize money for winners. Entry for awards will open immediately after the race and winners in seven categories and the overall winner will be announced in the first quarter of 2023.”

On calls to have a media race by the side of the Abuja International Marathon, Thomas said no promises can be made although it would be tabled before the organisers for consideration.