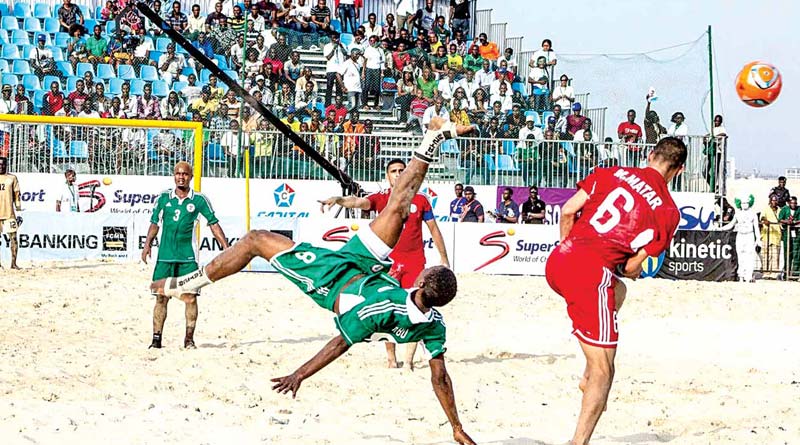 Nigeria’s Sand Eagles coach, Audu Adamu, and his team captain Isiaka Olawale are very hopeful that Nigeria can reach the semi-finals of CAF Beach Soccer Africa Cup of Nations. They spoke on the backdrop of their loss to Ivory Coast via penalties at the Eko Atlantic City in Lagos on Wednesday.

Eagles were beaten 3-1 after the result stood at 4-4 after the regulation time.
Adamu said the Ivorians, Nigeria and Egypt, are in battle to reach the semis from Group A and he is very optimistic that his side would continue the race.
He said on Wednesday, “I think we were unfortunate to lose this game because the players gave their best. But it is not the end of the tournament because we still have a game to play against Ghana (on Thursday). We all know how important this game is and will give our best like.”

Olawale described the match against Ghana as a must win.
“Cote d’Ivoire have always been a tough side. They have deprived us of winning COPA Lagos twice. We must agree that our group is a tough one honestly. And as it is now, we must beat Ghana, if we must qualify for the World Cup,” he told reporters in Lagos.

The winner and the first runners up will qualify for the FIFA Beach Soccer World Cup holding in the Bahamas, Nassau from April 27 to May 7, 2017.
The Sand Eagles won the beach tournament in 2007 and 2009. Madagascar won the last edition in 2015.