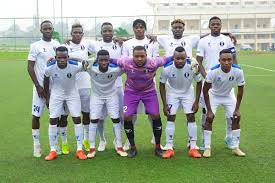 Head Scout of the Nigerian national team, the Super Eagles, Tunde Adelakun, has hailed the promotion of Shooting Stars Sports Club to the elite professional league in Nigeria after a few years absence.

3SC gained promotion by reaching the final of the NNL Super 8 league playoffs, only losing out in the final match 3-2 to Niger Tornadoes which denied them the NNL title.

Adelakun, who worked with the Oluyole Warriors in various capacities years ago and is a lifelong fan, said he was excited when the news broke.

He said, “This is wonderful. Shooting Stars are back where they belong – in the top echelon of Nigerian football. This team has history, and it was painful day in day out, watching as they languished in the lower league while teams were doing well around them.”

The one-time African champions have had a topsy-turvy time in and out of the elite division, the highlight of which was as far back as 1996 when they reached the final of the African Champions League, losing narrowly to Egyptian giants, Zamalek. From then on, it had been a story of ups and downs, more downs than ups for the pride of Ibadan, and Adelakun, who relishes the memories of the good old days, is wary of what lies ahead.

“I grew up knowing this team as the top team in Nigeria. I have so many memories, trying my hardest to be a player there, working with the team and cementing good friendships with players and officials of the team. I followed them a whole lot, and like I said, it remains a pity that we have seen many low moments over the years.”

Adelakun, who is also the President of the African Football Scouts and Coaches body (AFSCON) urged the government of Oyo State to ensure that it gives the support required for 3SC not just to be in the NPFL, but “to stay there with impact.”

“The governor of Oyo State is someone I have heard of, as one who has passion for the sport, which is always good. We also have to identify the potential that 3SC has of becoming a proper football brand – a marketable brand that can end up being self-sustaining.

“Our catch phrase must be ‘no more relegation for Shooting’, as we have endured too much relegation over the years. This team should be competing to get back to the top of Nigerian football, and competing amongst the big historic rivals we used to have. Remember the likes of Horoya FC of Guinea, Al Ahly Egypt, Gor Mahia of Kenya among others are still going strong, and great match-ups in African competitions will be most welcome in our circles.

“But first things first…congratulations to the team, and let’s get the first season started, and see where we go from there.”