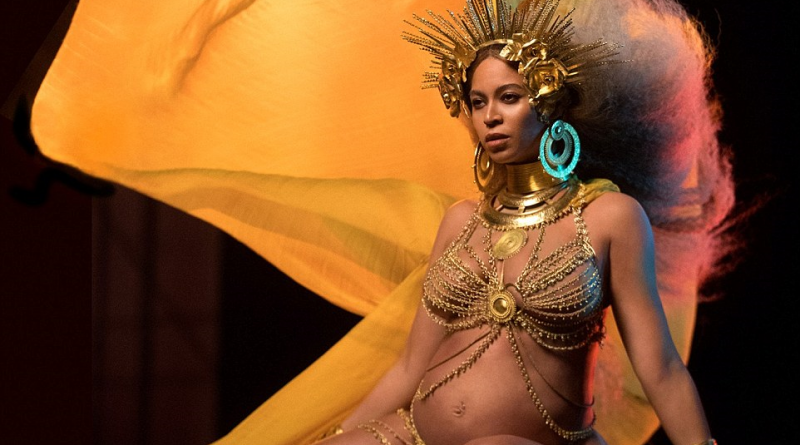 Beyonce made her performance debut as the expecting mother of twins on Sunday with a New Age celebration of women at the Grammy Awards.

The pop superstar, who led the night’s nominations, appeared for the first time in public since she set the internet ablaze with news that she is pregnant.

Beyonce chose not to play it safe, instead putting on an extravagant and abstract performance with touches of Indian spirituality and ancient Egypt, according to AFP reports.

Beyonce was introduced by her proud mother before an image of the 35-year-old singer, her baby bump openly visible under her bra, flashed on the screen. She was also shown with her mother and daughter Blue Ivy, all in gold.

The real Beyonce then appeared wearing a golden crown and flowing cape alongside dozens of female dancers, who made formations around her as they turned the stage into a sea of flowers.

But it wasn’t only Beyonce who made real impact on the night as Adele triumphed once again with five awards for her latest blockbuster album of ballads, but she used her moment in the sun to heap praise on Beyonce, whom she bested for top honours.

The English balladeer swept up the trio of major prizes at the music industry’s biggest night – Album, Record and Song of the Year – along with two other pop awards. Beyonce walked away with two trophies.

And in a sentimental homage to late rock icon David Bowie, his final album “Blackstar” earned five awards, including four posthumous prizes for the singer.

Adele, who has stood by her winning style of heart-wrenching songs of loss and regret, became the first act ever to sweep the three key categories in two different years.

Adele made a similar sweep in 2012 with her last album “21” – which remains the only album to have outsold “25” in the past decade.

Fighting back tears, Adele took the podium and paid tribute to Beyonce, who had led the night’s nominations with nine for her politically edgy “Lemonade.”

“My idol is Queen Bey and I adore you. You move my soul every day,” Adele said as she looked at Beyonce, who was making her first public appearance since announcing she was pregnant with twins.

She hailed Beyonce’s album as “monumental and so well thought out, and so beautiful and soul-baring,” suggesting it should have won, bringing her rival to tears.

On the night Beyonce sang two songs from her latest album, “Love Drought” and “Sandcastles,” interspersed with spoken word incantations on women and their power.

“If we are going to heal, let it be glorious,” Beyonce said.

She ended the performance with a glance down to her husband, rap mogul Jay Z, and Blue Ivy, both of them beaming.

The performance was in keeping with the new, edgier persona of Beyonce, who has geared her music away from the more mainstream audience of her pop hits.