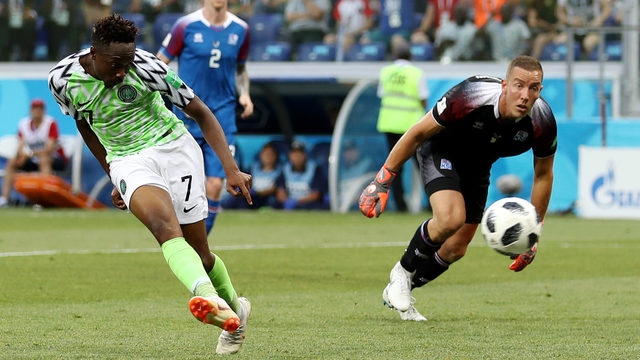 Nigeria’s captain Ahmed Musa has said that though the Super Eagles exit from the 33rd Africa Cup of Nations was a hard one for the players, there is no time for any pity-party and the shock has only made the squad stronger as lessons have been taken on board for upcoming challenges.

“You know it is still a shock but I can assure you that things like these make a team stronger. We did our best in the circumstances. When you lose at a tournament, it hurts really badly. However, we don’t have time to keep reflecting over what went wrong.

“We have very important challenges in front of us, and all we can do is stay stronger and have firm belief in ourselves that we can do it. The focus is now on the World Cup play-off.”

Nigeria exited the 33rd AFCON after losing 1-0 to Tunisia’s Carthage Eagles in a Round of 16 encounter in Garoua, Cameroon on Sunday evening.

On return to Abuja on Tuesday morning, Youth and Sports Minister Sunday Dare had a breakfast meeting with the contingent where he said that the Government was proud of the squad and its performance, “and how they comported themselves as ambassadors of our nation.” He stated that “this team will improve and become a solid and fierce contender in any competition we enter,” while praising the technical crew led by Augustine Eguavoen for “a strong performance.”

He added: “The overall performance of the team during this tournament shows we have regained our better footing and are heading in the proper direction. Our football, once again was fluid, purposeful and beautiful to watch. We have a good team and Nigeria will help them to get better.”

Up next for the Super Eagles is the 2022 FIFA World Cup play-off with the Black Stars of Ghana, with the Ghanaians set to host the first leg and the reverse in Nigeria, both matches to take place between 24th and 29th March.

In 57 previous encounters over 71 years of an intense football rivalry, Nigeria have won 16 of the matches, with another 18 drawn, while Ghana have won 23. Both countries have been involved in World Cup qualifying fixtures for the 1962, 1970, 1974 and 2002 finals, with honours evenly shared.

Ghana edged the contention for the 1962 FIFA World Cup ticket with a 4-1 win in Accra and 2-2 draw in Lagos. In the race for Mexico 1970, Nigeria won 2-1 in Lagos with the return leg ending 1-1 in Accra. For the 1974 finals in Germany, Ghana were awarded a 2-0 win for the first leg that was abandoned in Lagos, with both teams ending it 0-0 in Accra in the return.

In the race for Korea/Japan 2002, both teams battled to a 0-0 draw in Accra, with the Eagles winning the return 3-0 in Port Harcourt.