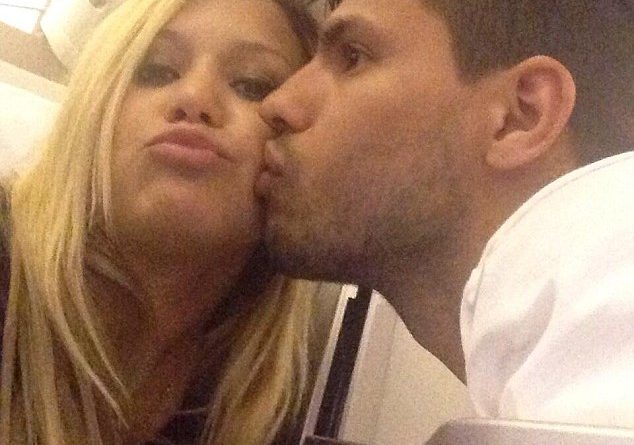 Karina Tejeda who has been a long time girlfriend was reportedly furious with him for going to a party where models were attending while he was back in Argentina for an international match.

The Sun on Sunday reported ace striker Sergio Aguero is now reeling from a split with his pop star lover. The Manchester City hot shot, 29, who broke a rib in the smash, is said to have drifted apart from 31-year-old Karina.

Karina, known as The Little Princess in their Argentinian homeland, and Aguero had been dating for four years. But she was reportedly angry at him for attending a party with several models on a brief return to Argentina.

The hitman is said to have gone along with team-mates from the national side ahead of an international match. He is now said to be trying to woo his girlfriend back with Instagram likes of sexy photos she has posted.

It comes after £50million Aguero was hurt in Amsterdam on Thursday when his taxi skidded and hit a lamp-post.

In a tweet, the ace, who had just been to a gig in the Netherlands’ capital, described it as a “very heavy slam.”

Karina only learned of the smash from an Argentinian TV reporter. It is believed that getting the news from a third party rather than Aguero may have aggravated their difference.

She appeared blasé when told, shrugging her shoulders as she said: “Really? I didn’t know. Oh well.”

Last week, she spoke about the couple’s break up while appearing on a cookery TV show in Argentina. Asked about the separation, she replied, “From the start I didn’t say many things. And I feel really good for having done it that way.

“Today I don’t want to tell anything. I simply realise that people expect that I should sit down to maybe speak badly or drop a hint in one of my songs.”

On Aguero, she added, “With regards to him, I have a lot of respect for him and I’m not going to touch on that topic. People think I’m angry but I’m not. I’m very well.”

Aguero, who has scored seven goals in eight matches this season, got together with Karin after the break-up of his marriage to Giannina Maradona, the daughter of football legend Diego. He and Giannina, 27, have a son called Benjamin, seven.

The star, who is likely to be out the game for a month, and Karina appeared a picture of happiness at a wedding in June. Other sources believe the main reason behind their separation is their busy careers.