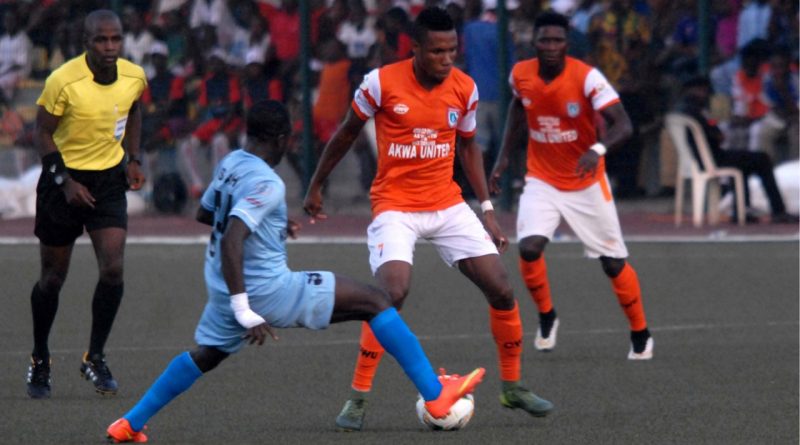 Midfielder Michael Ibe scored four goals and team captain Ariwachukwu Emmanuel also scored as Aiteo Cup defending Champions Akwa United came from a goal down to despatch Nigeria National League side Aklosendi FC of Lafia 5-2. It was a round of 32 of the 2018 Aiteo Cup at the Nnamdi Azikiwe Stadium in Enugu on Sunday.

The defending champions fell behind after just eight minutes through Aruna Sule’s left-footed volley but it appears the early goal motivated the NNL side to dominate play temporary before Akwa gained control of the match.

The NPFL side created two great chances in the 16th and 20th minute but Victor Mbaoma and Michael Ibe were unable to direct their efforts at goal. Coach Abdu Maikaba’s men levelled the scores in the 25th minute through Captain Ariwachukwu Emmanuel’s powerful header from Aniekeme Asuquo’s beautifully delivered corner.

In the 37th minute Midfielder Michael Ibe finish off Aniekeme Asuquo’s brilliant cross from the right to put United in front as they went into the break with a deserved 2-1 lead.

The defending champions began the second half where they left off the first. Ezekiel Bassey who was a thorn in the flesh for the Aklosendi defense was fouled on the edge of the box thirteen minute after the restart. Ibe stepped up and curled in a superb freekick for his second goal of the match.

The midfielder got his in hat-trick in the 84th minute when he calmly controled Boniface Mathew’s flick on from Cyril Olisema’s corner before dispatching it splendidly beyond Job Mathew in Aklosendi’s goal.

Aklosendi pulled one goal back when substitute Adeshina Gata brought down Chi Dingba in the box and the referee awarded a penalty to the NNL side. Adeiza Suberu beat Ojo Olorunleke from twelve yards to give his team some hope.

The victory secured the Promise Keepers passage to the Aiteo Cup round of 16 as they continue their quest to retain the trophy they won last year.

The Uyo based side will know their next round opponents when the draws are conducted later this week.

AITEO Cup Round of 32 Results (Men)

AITEO Cup Round of 24 Results (Women)