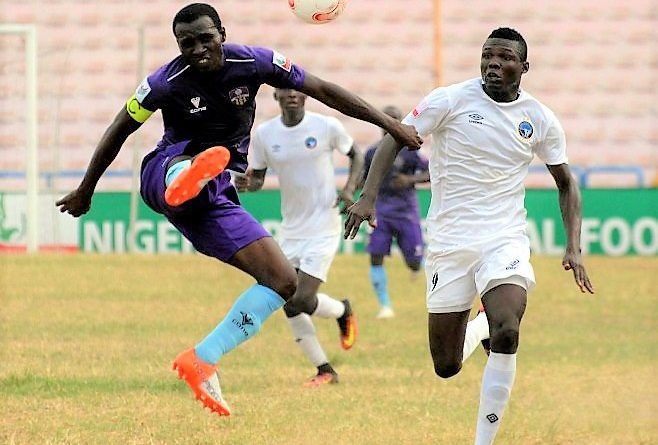 Akwa United on Friday defeated Lobi Stars 2-1 in Nigeria Professional Football League (NPFL) clash at the Uyo Township Stadium. Akwa did not use their traditional venue which is getting ready for the big World Cup qualifying match between Nigeria and Cameroon. The win keeps pressure on Mountain of Fire Miracles Ministries who are second on the table behind Plateau United.
Musa Newman and Gabriel Okechukwu scored in the 20th and 40th minute respectively for Akwa Kingsley Eduwo, scored for Lobi.
Akwa United head coach Abdul Maikaba was happy with his team’s performance.
He SuperSport, “We are used to the playing turf of the Godswill Akpabio Stadium as we just trained once on the Uyo Township Stadium.
“We tried to formulate a strategy to keep the opponent far away from our goal post and it helped us greatly throughout the clash. Of course, there are two matches for us to play on the season’s calendar and we have to finish the matches well to confirm our continental ticket.
“After the two crucial matches we will be able to ascertain whether we are good or not for the continent.
“The ongoing season has been fantastic, we started slowly but kept improving by each passing day and now we are within the title contending bracket.
“We will work very hard to finish the season greatly,” said the former Enyimba and Wikki Tourists coach to supersport.com.
Lobi coach Solomon Ogbeide said the pitch was not as bad as he feared initially.
“Initially, there was fear over the pitch but it was not as bad as I thought as the pitch affected both sides equally. It was a good game; I think we had the upper hand in the second half of the clash though we missed some chances.
“I believe we will finish the season well though Lobi Stars are still building but expect a far improved side next season.
“We will work very hard to concentrating on excelling in the ongoing Aiteo Cup.”
Akwa United remain third with 57 points, five behind leaders Plateau while Lobi have 47 points with two matches to end the season.