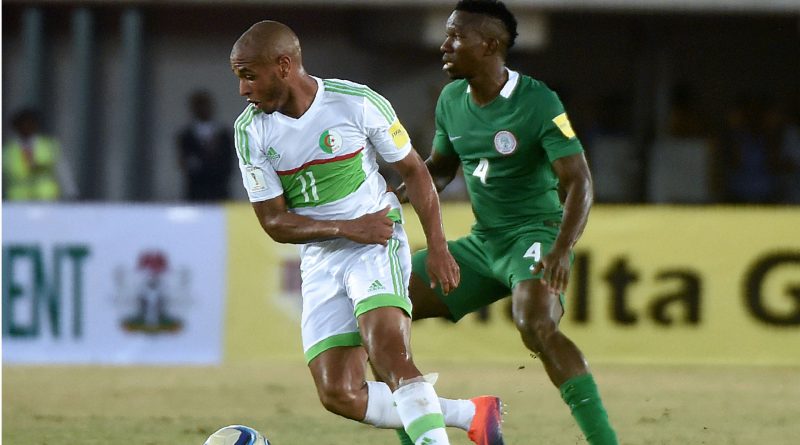 John Ogu scored as Algeria and Nigeria settled for a 1-1 game on Friday night in Constantine, Algeria.

It was a quality end to the 2018 World Cup qualifying matches for Nigeria as they stayed unbeaten all through the race to Russia 2018..

A second half strike from Ogu was cancelled out by Yacine Brahimi following a penalty to the hosts that left spectators baffled.

Brahimi converted the spot-kick in the 88th minute.

After the dull spells of the first half, Nigeria started the half the better side, but they could easily have fallen behind around the half hour mark when goalkeeper Ikechukwu Ezenwa fumbled with a simple catch, but Yacine Brahaimi failed to keep his header down. Ogu made them pay dearly as he latched onto a poor clearance out of the box of Algeria, before curling home a sweet left foot shot from over 25 yards for the opening goal of the game.

And Nigeria coach had the game against Argentina in mind and so with Super Eagles through to the 2018 World Cup with 13 points in the bag and lots of injuries, Gernot Rohr chose to field fringe players.

Mainz defender Leon Balogun captained the team for the first time and maintained his combination with William Troost Ekong at the middle of the defence. Shehu Abdullahi and Ola Aina played in the full backs.

The game lacked pace with both sides knocking the ball around and committing fouls.With the impressive result, Nigeria ended the qualifiers with four wins and two draws in six matches.