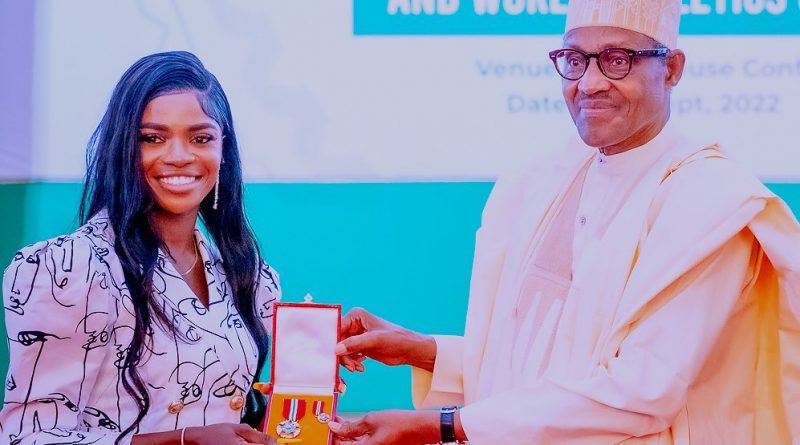 Hundred metres hurdle record breaker Tobi Amusan has been conferred with National Award of Officer of the Niger (OON). The award was bestowed on her by President Muhammadu Buhari in Abuja.

Amusan who was a delight to watch as posted a photo finish performance at the World Athletics Championship in Oregon, USA as well as the recently concluded Commonwealth Games in Birmingham has been hailed by Nigerians at home for taking the image of the country to greater heights with a brilliant performance.

She was however not the only one that received a pat on the back as other athletes including Adijat Olarinoye were also honoured with various awards. On hand to witness the award being conferred on the athletes was the Minister for Youths and Sports Sunday Dare among other dignitaries.

Amusan has now ranked among the most impressive athletes Nigeria boasts off. Among her retinue of accomplishments include being World Champion breaking record in the 100m hurdles with 12.12s.

Also in her kitty are Diamond League champion, Commonwealth Champion National Champion with 17 wins in 25 races and still counting. Die hard track and field lovers have found themselves replaying her photo finish in Oregon and Birmingham over and over weeks after the events ended.