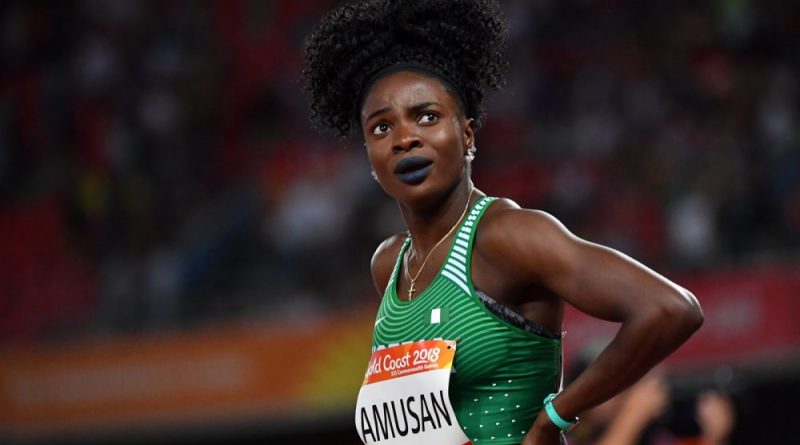 Reigning Commonwealth and African Games champion Tobiloba Amusan wept uncontrollably as the electronic timer denied her the chance to set at least one of two records looking to be broken at the Athletics Federation of Nigeria, AFN, 2020 Olympic Trials. This happened on Friday at the Sports Ground of the Yaba College of Technology, Lagos.

The petite sprinter came into the championships with an intimidating credential. Early this month an excessive tailwind rendered what could have been a new African record illegal after running one hundredth of a second faster than the 12.44 seconds African record Glory Alozie set in 1998.

The wind had earlier at the same race in Florida denied her chance to equal Alozie’s time with her 12.44 seconds performance.

The stage at the Yaba College of Technology seemed the perfect place for a record Alozie first set at the Herculis Zepter in Monaco in August 1998 to be broken but all the negative elements combined to rub her of a glorious outing just a day after sprinters, Blessing Okagbare and Enoch Adegoke wowed the crowd at the arena with breathtaking performances.

The 24 year old looked ready to at least consign to history the 12.63 championships record set in June 1997 in Lagos by Angela Atiede.

This was barely three months after Amusan’s birth in April 1997.

Amusan showed a glimpse of a big day in the offing when she raced home first in 12.56 seconds in the semi final ran about 90 minutes earlier. The time, albeit wind-aided was enough to wet the appetite of the expectant crowd who were cheering the 2019 World Athletics Championships 100m hurdles finalist in every of her professional scale of the hurdles.

The big moment came and the 2017 NCAA champion was in full flow as she raced home first with the crowd eager to see her time.

Roars of disappointment filled the arena as the electronic timer read just 0. Amusan’s time was not captured electronically. The manual timing read 12.3. While she could have missed out on breaking the watching Alozie’s 12.44 seconds African record, Atede’s 12.63 seconds championship record would have been broken.

Tears rolled down freely from her eyes after she walked back to the electronic timer to behold an unfamiliar sight.

In the men’s version, Oyeniyi Abejoye won the race to add to the National Sports Festival title he won at Edo 2020 in April.

In the absence of Okagbare and Favour Ofili, Grace Nwokocha won the women 200m in 22.87 seconds while Jerry Jakpa won the men’s half lap in 20.80 seconds.

Chidi Okezie won the men’s 400m title to add to the gold he won at the Edo 2020 National Sports Festival while Patience Okon-George returned to winning ways in the women’s 400m, beating Knowledge Omovoh and Imaobong Nse Uko to settle for the silver and bronze medals respectively.

The Sports Centre turned upside with the arrival of BBNaija star, Mike Edwards, and the fans were not disappointed as he won the men’s high jump, with a jump of 2.20m.

Oyesade Olatoye won the women’s Shot Put with a throw of 17.52m.