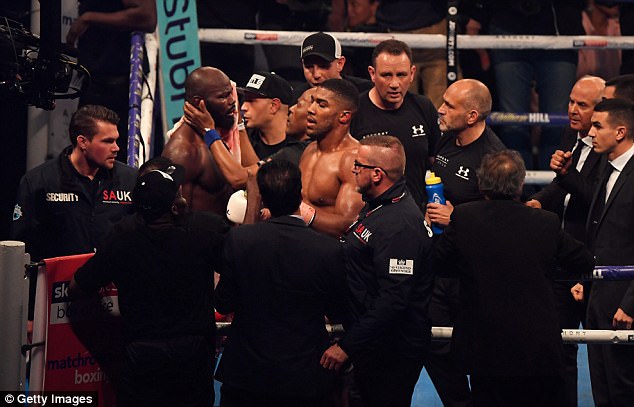 Anthony Joshua retained his IBF world heavyweight title on Saturday night after he defeated Carlos Takam. The Cameroonian became the 20th fighter to lose to the champion in a professional bout.

Takam, who had won 35 of his 40 fights before facing Joshua, bloodied the nose of his opponent in round two but he did so with his head, rather than his hands.

Both fighters were bleeding in the fourth when Takam went down but he battled on bravely despite a cut to eye. The Cameroonian almost lasted 10 rounds before referee Phil Edwards stopped the fight with Joshua on the verge of a knockout.

But Takam is not happy with the referee’s stoppage and feels cheated. He is already demanding another chance to fight the champion.

He said immediately after the fight, “I want a rematch.”

Joshua introduced his father to the filled Cardiff arena soon after the bout saying, “This is my father; he’s straight from Nigeria.”