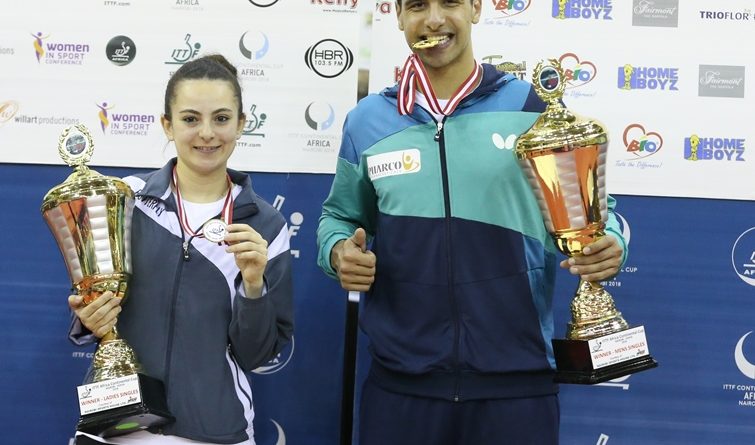 Egyptian national anthem was sang twice during the presentation at the 2018 ITTF Africa Top 16 Cup held in Nairobi, Kenya as Omar Assar and Dina Meshref claimed the titles at the three-day tournament.

Meshref was at her best against Cameroun’s Sarah Hanffou as the defending champion won 4-1 to retain her title in the women’s event.

The final between Assar and Quadri has been adjudged as a good advert for Africa as both players dazzled with their precise stroke and shots that received applauds from the fans at the Kasarani Hall of Moi International Sports Centre.

The climax of the encounter was the comeback of Quadri from 3-1 down to put the game at 3-3 but at the end it was Assar who lifted the trophy.

Apart from winning the titles, Assar and Meshref have qualified for the 2018 ITTF World Cup holding later in the year as the continent’s flag bearers.

Meshref said in Nairobi, “I am quite happy that my dream of making it to the ITTF World Cup has become a reality because the tournament is special to me. Against Sarah, I was a bit calm and think well before making any tactical decision. I did not really expect her to give me a tough time, but after the first two games, she played well to raise the game and I must commend her for putting up a good performance.”

Nigeria’s Edem Offiong and Egypt’s Ahmed Saleh had to settle for bronze after beating Algeria’s Lynda Loghraibi and Congo Brazzaville’s Saheed Idowu in the third place matches for men and men respectively.

Top 32 players made up 16 men and 16 women competed in the three-day tournament with winners in each event carting home $5000.