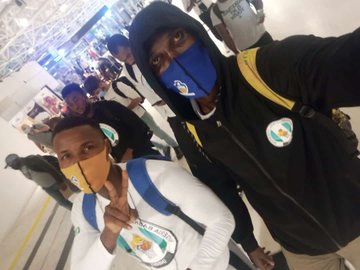 Nigeria’s representatives in the Basketball Africa League, Rivers Hoopers may have touched down in Kigali, Rwanda by the time you are reading this. The KingsMen who left Lagos Monday afternoon aboard an Ethiopian Airlines flight got in touch with the media when they arrived in Addis Ababa for the planned stopover.

“We landed safely in Addis Ababa few minutes ago; waiting to connect our next flight to Kigali,” Hoopers media announced.

The coach of the team, Ogoh Odaudu did confirm their departure plans to Extrasportsnigeria.com after a training session at the Teslim Balogun Stadium, Lagos on Thursday.

“We are confirmed for Monday and everything is targeted towards that plan,” Ogoh, a former national point guard said.

They kept to the 1.40pm schedule on Monday.

Rivers Hoopers are in Group A for the preliminary stage. They will face Patriots of Rwanda, Gendarmerie Nationale Basketball Club (GNBC) of Madagascar and US Monastir of Tunisia for the early stage.

BAL divided the 12 participating teams into three groups of four which will feature an 18-game group phase with a total of 26 games.

The BAL competition will take place between May 16 and 30 at the Kigali Arena, Rwanda.