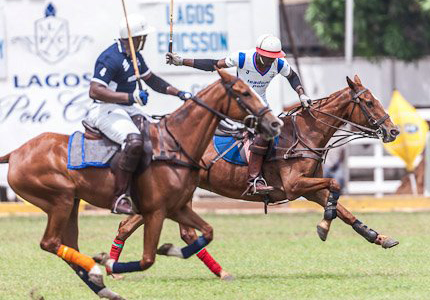 The Balmoral-Sao Polo clash started on a topsy-turvy note as Baba Dangote (+1) had his shot off target and Isa Kwame (+3) failed to convert the resultant penalty from 40 yards for Balmoral, who also have Luqman Adebayo (+1) and Kabiru Saidu (+2).

It was the turn of Sao Polo’s hitman Ahmadu Umar (+3) to fluff his own 40 yards penalty to highlight a tough opening chukka.

The first goal did not come until 12 seconds to the end of the chukka with Kwame breaking the deadlock.

Kwame made it 2-0 with another 40 yarder before Rotimi Makanjuola (+1) halved the deficit for Sao Polo who also featured Seyi Oyinlola (0) and Abdulrahman Mohammed (+3).

Kwame was on hand to score his and Balmoral’s third for a 3-1 lead but Mohammed kept Sao Polo on their heels by scoring to end the second chukka 3-2 advantage Balmoral.

Balmoral lost their first match and will be eliminated with another loss and were more aggressive in the third chukka. Despite a 40-yard penalty miss by Kwame, Adebayo puts them two-goal clear going to the last chukka.

Umar, by his standard was having a very tough game with no goal scored by him in the first three chukkas but he got on the score sheets to bring the game to a nervy conclusion at 5-4 with over three minutes to end the game.

The game was held up for about 12 minutes after Mohammed fell heavily needing medical attention and losing his horse in the process.

In the first match of the day, Murtala Aliyu scored twice in the last chukka to give Kano Nakudu a 6 – 4 1/2 win over Ibadan Eleyele who at a point were leading 4 1/2 – 3 in the final chukka.

Lagos Eat N’ Go were relieved to see the seconds tick away in their nervy 8 1/2 – 8 win over Lagos Lintex. Yemo Alakija’s low shot proved to be the winning goal as Lintex scored the last three goals of the match through Abba Dantata (twice) and Jamilu Umar.