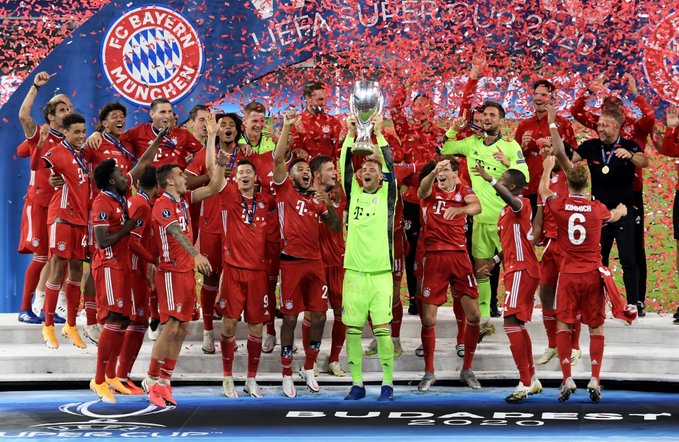 Bayern Munich were taken to extra time by a durable and resilient Sevilla in front of around 20,000 fans in Budapest before adding the UEFA Super Cup to their Champions League trophy.

The showpiece was watched by supporters inside the 67,000-capacity Puskas Arena, the first major European match to allow fans since the Coronavirus pandemic forced the game into lockdown.

And they witnessed a hard-fought encounter which saw Sevilla take the lead from the penalty spot on 13 minutes when Lucas Ocampos scored an outrageous “no look” penalty after Ivan Rakitic was bundled over by David Alaba.

Bayern equalised before the break, Leon Goretzka scoring from Robert Lewandowski’s superb touch, with both sides having opportunities to win after the break.

Lewandowski and Leroy Sane saw goals chalked off for Bayern but the biggest chance fell to Sevilla substitute Youssef En-Nesyri in the closing moments, seeing his shot touched away by Manuel Neuer with only the keeper to beat.

This victory makes it 32 games unbeaten in all competitions for the treble winners, while they ended Sevilla’s own 21-game unbeaten run.

It was a game with atmosphere as fans returned to the big European occasion, albeit in vastly reduced numbers and also observing social distancing, wearing masks and undergoing temperature checks before the game.

The decision did not win unanimous approval, with opposition from some local officials in Budapest to the game being staged with fans.

It did add atmosphere as fans of both clubs were in attendance despite the rise in Coronavirus cases around Europe, with Bayern fans even indulging in some of the traditional baiting in an attempt to Ocampos off as he prepared to take his penalty.