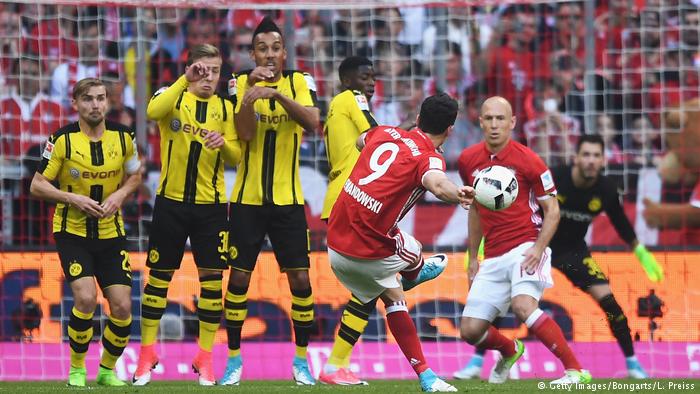 Bayern Munich geared up for their massive Champions League clash with Real Madrid, by sweeping aside Borussia Dortmund with a 4-1 win in Der Klassiker.

Bayern responded to their midweek defeat at Hoffenheim with a magisterial display at the Allianz Arena, exposing and putting to the sword Thomas Tuchel’s young Dortmund side.

Franck Ribery drove home a Philipp Lahm cross after just three minutes to hand the home side the lead, before Robert Lewandowski curled home a freekick to double their advantage six minutes later, according to The Mail report.

Dortmund fired back before the 20 minute mark, Arturo Vidal’s poor clearance slammed into the roof of the net by Raphael Guerreiro, leaving Sven Ulreich no chance.

But Bayern dictated play, Thiago Alcantara revelling in the space afforded him by the Dortmund midfield, without the absent Julian Weigl, while Ribery and David Alaba gave young Felix Passlack a torrid time at right back. The only surprise before the break was that Bayern’s lead remained at only one goal.

However, it wouldn’t stay that way for long after half-time, the infuriatingly-brilliant Arjen Robben scoring with a virtuoso effort that left two Dortmund defenders on their backsides.

Pierre-Emerick Aubameyang would see an effort cleared off the line by Jerome Boateng, before Lewandowski wrapped things up with the home side’s fourth, coolly converting from the penalty spot after being brought down by Roman Burki.