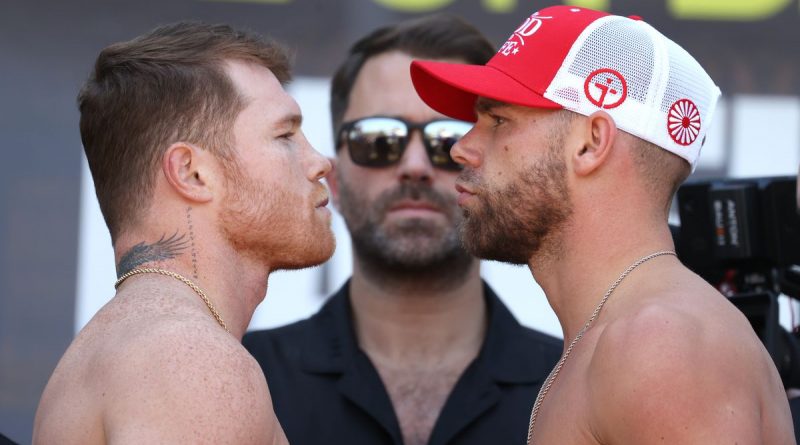 Saul ‘Canelo’ Alvarez weighs in at 167.4lbs, while Britain’s Billy Joe Saunders comes in at 167.8lbs ahead of world super-middleweight title unification clash at The AT&T Stadium in Texas Saturday night.

Billy Joe Saunders vowed to take the world titles from ‘Saul ‘Canelo’ Alvarez ‘by storm’ as the British champion appeared in peak condition for a huge unification clash, according to Sky News.

Britain’s WBO champion weighed in at 167.8lbs, with the Mexican star coming in slightly lighter at 167.4lbs for their super-middleweight showdown at The AT&T Stadium in Texas this weekend.

Saunders is yet to suffer a defeat in 30 fights and the two-weight world champion insisted he was supremely confident about defeating Canelo.

Three world super-middleweight titles are at stake in Texas

“I don’t think Alvarez has faced a man with as much heart and determination to win as me.

“It’s going to be a good fight, he’s a great champion, but to be honest with you, I’ve come here to take all of these titles and take them by storm.

“I haven’t lost since 2008. Thirty and O and unbeaten, so therefore he has to do something differently to beat me. Not the other way around.

“The key to this fight, obviously everyone has got to be on their A-game, bring their best to the table, and as long as I bring my finest spirit and my brain, I’ve got it.”

Canelo shared an intense face-off with Saunders, who made a No 1 gesture on the stage, and the pound-for-pound star played down the fiery pre-fight build-up.

“I’ve been in big fights before, I have the experience to deal with it, I’m ready for tomorrow,” said Canelo.

“He’s a difficult fighter and he’s also a southpaw but at this level you have to adjust to anything and everything and I’m ready for any style.”