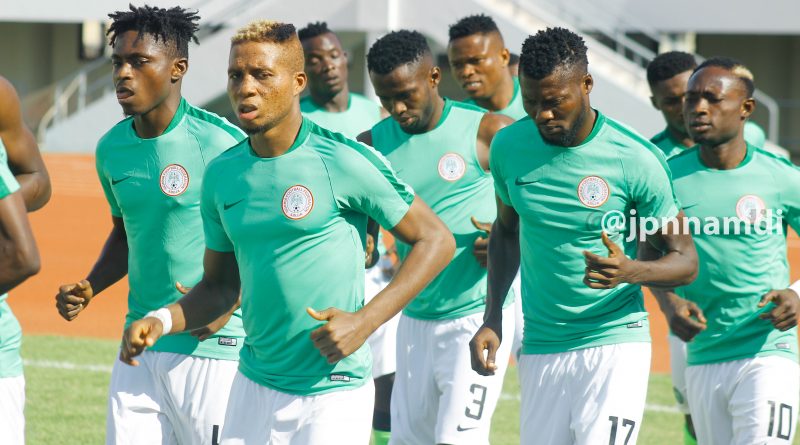 Home-based Super Eagles B, have intensified preparations for Saturday’s 2020 African Nations Championship qualifying battle with the Sparrow Hawks of Togo in Lagos.

Imama Amapakabo and his players have been training at the FIFA Goal Project, National Stadium, Abuja since returning from their expedition at the WAFU/ESPN Cup of Nations in Senegal last week.

The former international goalkeeper realizes that they have a mountain to climb, having lost the first leg in Lome 4-1 and then overwhelmed by the same team at the WAFU Cup of Nations in Thies, Senegal.

Amapakabo said, “We have a big job at hand, and I have been drumming it into the ears of the players that we cannot afford to fail. The Togolese won 4-1 on their home ground; nothing says we cannot do better on our own home ground.

“We have to be focused and determined. We must create chances and put them away, because we cannot afford not to be at the African Nations Championship.”

Nigeria finished as runners-up at the last edition of the African Nations Championship staged by Morocco early last year.

The winner over two legs between Nigeria and Togo will book a slot at the 6th African Nations Championship finals scheduled for Cameroon in June 2020.

NFF’s Director of Competitions, Ayobola Oyeyode confirmed to thenff.com on Wednesday that the delegation of the Sparrow Hawks for Saturday’s big match, which will hold at the Agege Stadium, Lagos from 4pm, will fly into Lagos aboard an ASKY Airline flight on Thursday.

The Confederation of African Football has appointed officials from Niger Republic to superintend the match, with Abdoulaye Rhissa Al-Mustapha as referee.

Alim Konate Aboubacar, from Cameroon, will serve as match commissioner.