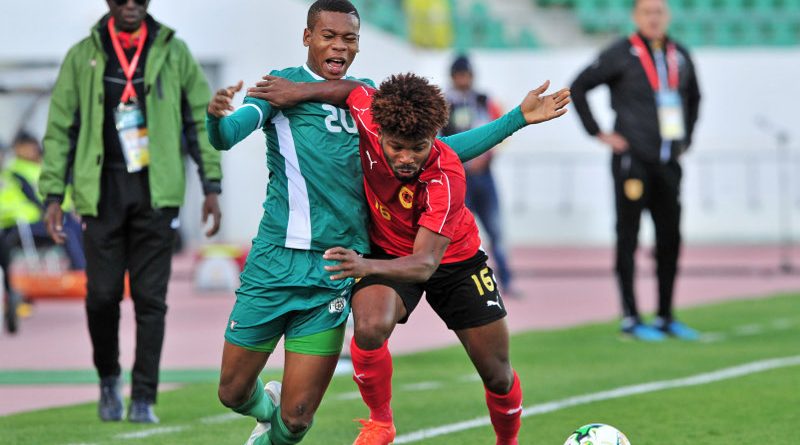 Burkina Faso opened their campaign with an eventful goalless draw against Angola in their Group D opener in Agadir on Tuesday.

The Stallions who were second best in most parts of the game but created the best opportunity seven minutes from time but Youssouf Kabore failed to hit the target.

Romeo Boni played in Youssouf who raced through on goal rounding the Angola keeper Landu but miscued his effort allowing defender Augusto de Jesus to clear the lose ball.

Angola’s Antonio Paty headed Daniel Joao Mira’s inviting cross over the goal when he was unmarked in the heart of the Burkina Faso six yard.

Antonio tested Burkina keeper Babayoure Sawadogo with a fierce strike from a distance but Sawadogo dived low towards his right to pull a save ten minutes into the second half before Mira and Wilson Pinto failed to convert the resulting corner.

Burkina Faso looked a threat on the break and striker Boni raced to goalkeeper Sawadogo’s long upfield clearance fending off an Angolan defender but dragged his shot straight at the keeper.

Sawadogo was called to action after Angola pressed through the left channel with captain Ricardo Job and Augusto de Jesus combining to play in Afonso whose effort was deflected to the path of Vladimir Felix but Sawadogo made himself big to pull a save.

Coach of Burkina Faso, Drissa Traore gave thumbs up to his defenders.

He said, “I’m satisfied with my team’s performance especially the defence. They did a great job, an improvement of the performance during the test matches against Tunisia and Libya. I’m hoping to have the players who missed the game due to injury for the next matches.”

Srdan Vasiljevic, the coach of Angola said, “We have a vision and clear objective. I’m happy with how the players played and also their work rate. They were very dynamic and I hope they will continue for the next game.”