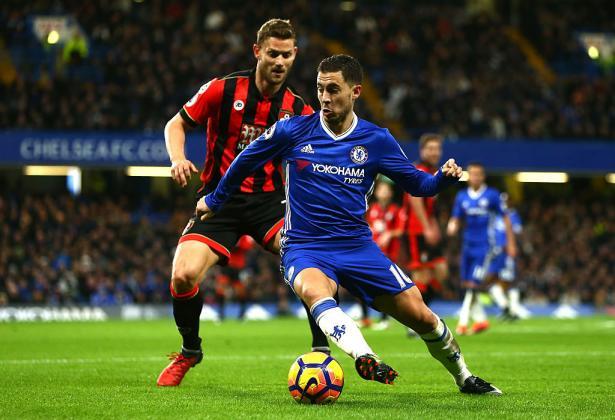 Chelsea maintained their seven-point lead at the top of the Premier League with an entertaining victory over spirited Bournemouth.

Pressured by Tottenham’s earlier thrashing of Watford, the visitors looked to be cruising after two goals in three first-half minutes, according to the BBC report.

But Bournemouth, who had already hit the post, got back into the contest through Joshua King’s long-range deflected effort.

The Cherries continued to press after half-time, only for Chelsea to gradually regain control and secure the points through Marcos Alonso’s impeccable free-kick.

The Blues next travel to Manchester United, their sternest of six league fixtures between now and the end of the season.

If they return from Old Trafford with their seven-point advantage still intact, they will be a huge step closer to a sixth title and fifth in the Premier League era.

A week ago, Chelsea’s seemingly unstoppable march to glory was disrupted by a shock home defeat by Crystal Palace, giving hope to second-placed Tottenham.

However, they got back on track by beating Manchester City and seemed unaffected by Spurs’ earlier victory in producing an emphatic start in the south-coast sun.

If the Chelsea first goal was bizarre – Diego Costa’s scuffed shot went in off the head of grounded home defender Adam Smith – the second was sublime.

N’Golo Kante, excellent in both winning the ball and moving the visitors forward, found the equally impressive Eden Hazard with a precision long pass, allowing the galloping Belgian to round home keeper Artur Boruc.

The away side were pegged back either side of half-time, but gradually reasserted themselves as the second period progressed and Alonso’s curling, dipping free-kick killed the contest.

At the beginning of March, Bournemouth were winless in eight league games, only five points above the relegation zone and being dragged into a fight for survival.

However, some whole-hearted displays, including coming from behind to earn a point at Liverpool in midweek, meant this was their first defeat in six.

It could have been different with a change of fortune, too.

There was a huge slice of luck involved in Chelsea’s first and Benik Afobe was unfortunate to hit the woodwork when arriving late to meet Charlie Daniels’ cross.

With Afobe, King and Ryan Fraser all lively, the Cherries were willing to test Chelsea through the middle and got their reward when King lashed in his 13th of the season from outside the box, via a touch off David Luiz – even if Chelsea complained of a Smith handball in the build-up.

Ultimately, though, coming from two behind was too much to ask for the home side and it was Boruc who was the much busier keeper in the second period.