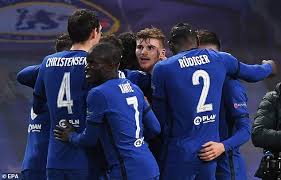 The SunSport confirms that the Blues pair both took part in training on day one of the build-up to Saturday’s clash with Manchester City.

Inspirational midfielder Kante has been struggling with a hamstring problem to the extent he missed Sunday’s Premier League finale at Aston Villa.

In the same game keeper Mendy was forced off at half-time after crashing into the goalpost making a save and injuring his ribs.

The stopper had to undergo scans in the wake of the incident and for a time boss Thomas Tuchel was sweating on his No1’s fitness.

But news that both have been passed fit for training at least is a massive plus for the Stamford Bridge outfit.

SunSports understands they took part in full training with the rest of the group and then did a session on their own.

Chelsea fly to Portugal tomorrow ahead of this weekend’s final and Tuchel may now have a full squad to choose from.

Without Kante on Sunday, the Blues slumped to a poor performance and 2-1 defeat against Villa in the West Midlands.

Midfielder Mateo Kovacic, himself just back from injury, struggled to replace Kante at the heart of midfield.