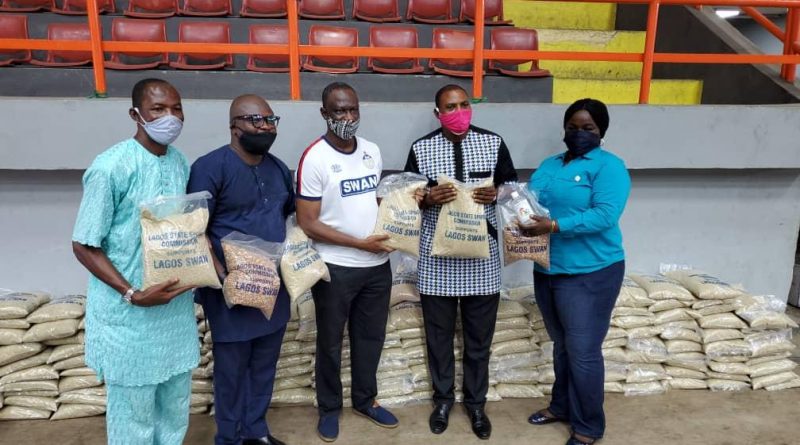 The Lagos government, through the state sports commission and O’Jez Entertainment have distributed palliatives to Sports Writers Association of Nigeria (Lagos SWAN) to cushion the effect of COVID-19 pandemic on sports journalists in the state.

The LSSC Director General, Oluwatoyin Gafaar,  who spoke at the presentation ceremony held at the Molade Okoya-Thomas Sports Hall of the Teslim Balogun Stadium, said the idea was to cushion the effect of the pandemic on friends of the commission.

“This is in line with what Gov. Babajide Sanwo-Olu has been doing to relief the citizens during this difficult period and SWAN Lagos is our immediate constituency.

“We have no option but to extend the gesture and support to the association. We have a lot of plans for Lagos SWAN members and as we move forward together, we will seek ways to support them.”

In similar vein, LSSC Director of Grassroots Development, Kolawole Olusegun, said that SWAN was a major stakeholder in the sports sector.

“We believe that Lagos SWAN is a major stakeholder in sports development, the association is our partner in progress and we’ve been working together.

“The management of the Lagos State Sports Commission deemed it necessary to reach out to the association by supporting them with these palliatives,” Kolawole said.

“You know in any given situation, journalists are at the receiving end. People always say journalism is a thankless job.

“Even during the lockdown that people were at home, we were still working. We had discussions with the sports commission on the need to support sports journalists.

”So, the state government, through the sports commission gave us palliatives to cushion the effect of the COVID -19 pandemic on our members,” he said.

The chairman said that O’Jez Entertainment also supported the association.

”We also have to thank O’Jez for fumigating SWAN Secretariat inside the National Stadium, Surulere.

“O’Jez  also provided face-masks and some food items for our members,” he said.

Oshundun said that the association provided boxes of Honeywell products for members.

“It’s tough for everybody, but this is what we have to do as an Exco for our members to ameliorate the economic effect of the pandemic.

”What matters to me as Chairman is the welfare of our members in any way or form so that we can achieve that with the support of my Exco, that’s what we do.

“We’ve had good relationship with them, even before my coming to office.

”We will continue to strengthen the relationship and make progress together,” Oshundun said.