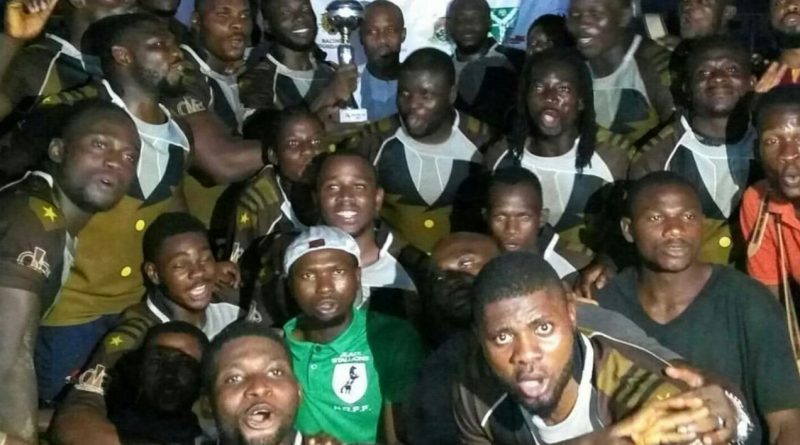 Rugby lovers in Lagos, Nigeria were on Saturday treated to a spectacular display of rugby from the brilliant side steps, bone crushing tackles and jaw breaking hits at the inaugural Racing 10s tournament which took place at the British International School, Lekki.

The 10s event saw in participation Cowrie RFC, hosts Racing RFC, Lagos RFC, Police RFC, Eco II RFC and Gosar RFC. The teams were divided into two groups consisting of three teams each in a group, after a round robbing in each group, Racing RFC and Police RFC qualified for semi final in group A while Cowrie RFC and Eco II RFC qualified in group B.

The first semi final saw Racing battle the developmental side from Ajegunle. The keenly contested game ended in favour of Racing by 17 points to nil. The second semi final between Cowrie and Police left spectators on the edge of their seats as both teams matched in ball possession but at the last minutes of the game, Cowrie scored a try through Azeez Olanrewaju a former player for Police RFC at the bottom of the upright to give captain Azeez Ladipo an easy conversion, which left the game at 7 points to nil.

The all anticipated final between the two island rivals Racing and Cowrie went in favour of the newly dethroned national league champions with 17 points to nil.

Ladipo said winning the tournament was crucial to the club especially after their last defeat by Barewa at the Super Cup.

“I am glad that we won this tournament despite our recent defeat at the Super Cup. If we had lost in this tournament it would have really damping the moral of the club but we will use this trophy to console ourselves for the recent one we loss.”

The tournament coordinator Adebambo Remilekun, expressed his excitement on the execution of the inaugural event.

“I am very happy about the way the tournament turned out even though my team lost, I will like to thank our sponsors Jason Height, Lagos State Rugby Association, Bogobiri House and British International School and the contribution of the club and teams that participated in the event.”