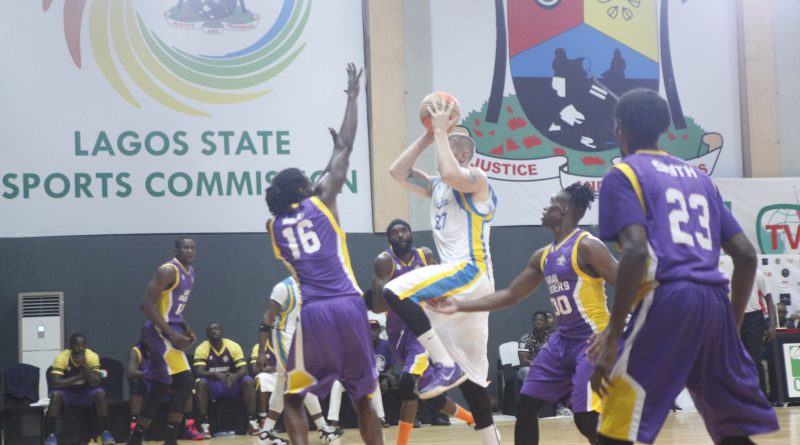 Champions of the Continental Basketball League, Lagos City Stars, have stated that the defensive system they adopted gave them trophy especially going by their approach to their last two games. City Stars defeated Abidjan Raiders 73-59 Sunday night at the Teslim Balogun Stadium in Lagos, Nigeria as Africa celebrated the birth of a great league.

On a night of glitz and style City Stars coach Godwin Owinje said at early stages of the tournament he determined they would not lay their hands on the trophy if they didn’t approach each match with the tightest of defences.

The former Nigeria international said, “I played under a coach who placed great emphasis on defence. We worked elaborately under him learning the best ways to defend. Starting out here I knew they were quite a number of talented players that could shoot you down and so we kept working and improving on our defence and that has helped us tonight.”

City Stars lost their last preliminary game in Yaoundé to original title favourites Eko Kings in a match basketball fans would love to watch over again a hundredth time. They were up by eight points with less than two minutes to the buzzer but still lost the match. It was the same Kings they met in the second semi-finals on Saturday but the story was different this time as they cut down the Kings to the astonishment of basketball faithful who had crowned the Kings even before the championship match.

On Sunday their new posture made City Stars the team to beat and they did not let down their fans as they kept the team from Ivory Coast at bay from the first quarter to the end of the match.

“Deep in our hearts we also believe we are champions and that’s why we are not sad tonight. We put in our best and that made it a very entertaining game,” Denise Ebikoro of the Raiders said.

“Any team that won this trophy did well and that’s why we have congratulated City Stars from the depth of our hearts. We are proud to have played in the final game and also happy that the fans got the kind of basketball they have also wanted in this part of the world.”

Jordin Mayes of City Stars who made shooting look so easy all through the seven matches he played was voted the Most Valuable Player of the tournament. He scored 191 points in seven matches and was followed Ikenna Mbamalu of the Lagos Warriors with 113 points. Mayes had 24 assists to stand at the 6th place in the final table of selected stars. Skilful Freddy Obame Obame of the Libreville Izobe Dragons who played only five matches was the best assist giver with 26.

Mayes told reporters, “Getting this MVP award is the highlight of this tournament for me. I just played to get my team this far but I have been so touched receiving such a huge award from amongst so many talented players.”

The basketball challenge tagged the ‘May Madness’ was put together in celebration of 50 years of Lagos State. It featured six teams: Eko Kings, Lagos City Stars, and Lagos Warriors from Lagos; the other African teams were Libreville Izobe Dragons from Gabon; Abidjan Raiders from Abidjan and Yaoundé Giants from Cameroon.