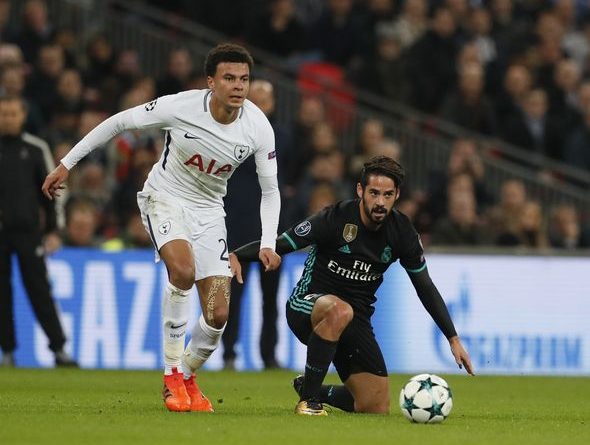 It’s indeed a wonderful Wednesday night for Tottenham Spurs as they defeated Real Madrid 3-1 in the champions League. The result made the London team the first to win a group game against the Spaniards since 2012.

Borussia Dortmund 1-1 Apoel in the group’s other game, meaning that Real only need a point to qualify.

There were two goals for Dele Alli, also, and while his reputation will grow so will that, even more so, of Spurs manager Mauricio Pochettino.

Alli’s goal was a just reward – a reward that had Cristiano Ronaldo shaking his head at how vulnerable Madrid were. Toby Alderweireld who had chased the ball down in the Madrid penalty area, crumpled to the ground with his hamstring apparently pulled.

On came Moussa Sissoko, with Eric Dier dropping back into the three-man defence, but not before Ronaldo, finally, threatened to sprint through only for Jan Vertonghen to intervene, according to The Telegraph report. Harry Winks spread the ball out wide to Kieran Trippier on the right, who had pulled away towards the touchline, and he volleyed first-time across the penalty area with Alli beating Nacho to the ball and sending it into the net.

It was Alli’s first taste of Champions League football this season, having served his three-match ban for his dismissal in the Europa League, and he had responded.

He should have had his hat-trick but glanced his header wide from Trippier’s cross but it was Ronaldo who scored, hammering home off Dier from substitute Borja Mayoral’s touch back.

Dele spoke after the game, “It was a fantastic performance from us. We knew if we stuck to the game plan and stayed solid at the back, we would have a lot of chances. We spoke after the game at their place and couldn’t believe the space we had. The easy pass was sometimes too obvious at times. We don’t want to compete with these teams, we want to be winning.”