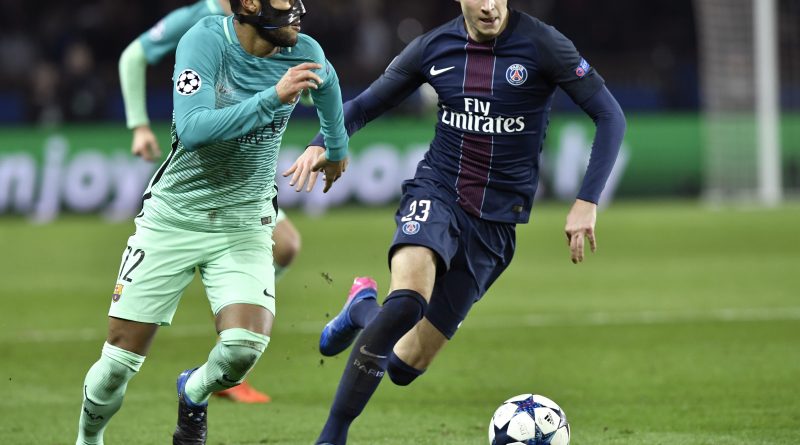 Angel Di Maria scored a brilliant brace on his birthday as Paris Saint-Germain sensationally destroyed Barcelona 4-0 at the Parc des Princes in their Champions League last 16 first leg on Tuesday.

Di Maria, the former Real Madrid star, opened the scoring in the 18th minute and curled in another 10 minutes into the second half to celebrate his 29th birthday in style, AFP reports.

January signing Julian Draxler also netted in between while Edinson Cavani marked his 30th birthday by adding his name to the scoresheet in the 71st minute in the French capital.

Barcelona were completely stunned, the defeat their biggest European humiliation since losing 7-0 on aggregate to Bayern Munich in the semi-finals in 2013.

They are now staring at a first exit from the competition before the quarter-finals in a decade, unless they can pull off a miraculous escape in the second leg at the Camp Nou next month.

This was PSG’s night, though, and Unai Emery’s side will surely go on to secure a fifth successive appearance in the quarter-finals.

“To win 4-0 against Barcelona on my birthday is incredible, we are so happy. It was the perfect match and we are delighted with the result,” Di Maria told beIN Sports.

“To go through we will need to produce another performance like this. We scored four goals but they are capable of doing the same thing.”

PSG had twice been eliminated from the Champions League at the hands of Barcelona in the previous four seasons, and the Catalans also had a fearsome record in games against sides coached by Emery, losing just one of 23 before this.

But Luis Enrique’s team, for all the brilliance of Lionel Messi, have recently looked more fragile than in a long time and the French champions showed no fear.

They were without injured captain Thiago Silva and the suspended Thiago Motta, meaning a start for Adrien Rabiot in midfield and a Champions League debut in defence for 21-year-old Presnel Kimpembe.

Draxler also made his European debut for the club and the German was superb as PSG pressed Barcelona high right from the off — the home side had already worked Marc-Andre ter Stegen in the Barca goal before they got the opener.

The menacing Draxler was fouled just outside the area and Di Maria bent the resulting free-kick over the wall and in for his third goal in the Champions League this season.

Crocked following an early foul by Rabiot, Neymar was off the field receiving treatment as the Parc des Princes crowd erupted.

He was able to continue, but the visitors were lacklustre, Luis Suarez starved of service, Messi quiet and skipper Andres Iniesta struggling to cope.

One Neymar acceleration did lead to an Andre Gomes shot that was turned behind by Kevin Trapp, yet otherwise the chances were at the other end.

Ter Stegen saved from Draxler after a counterattack, but there was nothing he could do as the German made it 2-0 five minutes from half-time, exchanging passes with Marco Verratti and rifling a shot past the goalkeeper from the right side of the area.

The expectation was that Barcelona would come out fighting after the restart but instead they fell further behind in the 55th minute to a piece of brilliance from Di Maria.

The move started with Trapp rolling a goal-kick out to Rabiot on the edge of his own box and the midfielder turning away under pressure from Messi. It ended with Di Maria curling a left-foot shot high into the top-left corner of the net from the edge of the other area.

Di Maria then came off to a standing ovation, but Paris were not finished. Thomas Meunier surged forward from right-back and set up Cavani, who thumped home his 34th goal of the season in all competitions.

A miserable night for Barcelona was compounded when Samuel Umtiti hit the post late on.