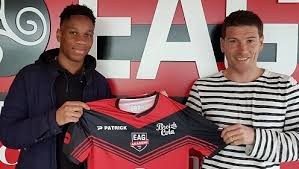 ISAAC DROGBA, son of Chelsea legend Didier, made his professional bow in the Italian fourth-tier on Sunday.

Earlier this month, the 20-year-old joined Serie D side Folgore Caratese to aid their promotion push.

And, in a win over Saluzzo at Stadio XXV Aprile, Drogba made his first appearance in a professional game, The Sun.co.uk reports.

The youngster spent last season in the reserves of French side Guingamp, where dad Didier also starred for a year as he made his way in the game.

Previously, the young Drogba had been part of Chelsea’s youth academy in another nod to his family’s heritage.

But he is now making his way in the town of Carate Brianza, to the north of Milan, where Folgore are based.

On Sunday, the Serie D Group A side were 4-1 up with ten minutes to go when Drogba was substituted on.

That is how the scoreline stayed, leaving the side ninth but only three points behind the play-off places with a game in hand.