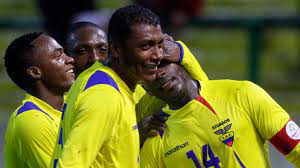 ECUADOR could be booted out of the World Cup – for fielding an ineligible player.

Thesun.co.uk reports that Chile lodged a formal complaint over the status of right-back Byron Castillo, who has previously faced accusations he was actually born in the Colombian border city of Tumaco.

But FIFA have now announced it has opened formal disciplinary proceedings “in relation to the potential ineligibility” of the player.

This would see Ecuador stripped of all their points from those matches and their opponents awarded 3-0 wins.

That includes Ecuador’s draw against Chile and a 2-0 win last November – which put Chile on the brink of elimination.

Chile, who finished seventh but lost twice to Ecuador, would then be propelled up the table to take the fourth slot in the finals.

An investigation has allegedly found a Colombian birth certificate from 1995 with the same name as Castillo and the same parents’ name, despite Ecuadorian documents stating the defender was born in 1998.

Lawyer Eduardo Carlezzo, who is representing the Chilean federation, said: “The level, both in quantity and quality, of the information and evidence that we have been able to collect has surprised even us.

“How could we not act with this level of evidence in hands?”

Castillo’s background has been the topic of speculation for some time with Ecuadorian officials previously holding concerns about his eligibility.

Carlos Manzur, the vice president of Ecuador’s football federation, suggested that Castillo previously was not called up due to worries about his eligibility.

He said in March 2021: “I think it’s a matter of playing it safe, avoiding problems.

“I think he is a good player. If it were up to me, I would not have him play for the national team. I would not take that risk. I would not risk everything we are doing.”