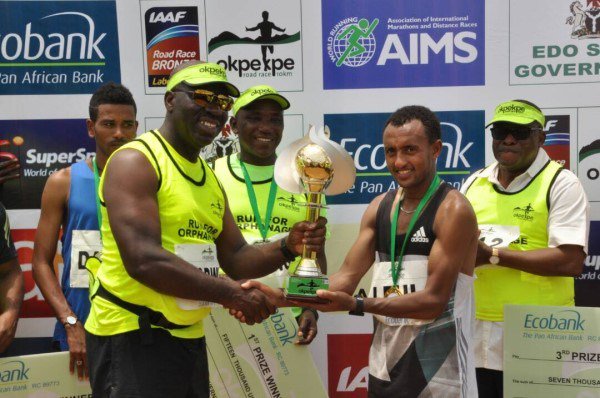 Immediate past Governor of Edo State Adams Oshiomhole has hailed his successor Godwin Obaseki for continuing the tradition of hosting the Okpekpe International 10km Road Race.

Oshiomhole, who is the grand patron of the race, believes Obaseki should be appreciated and congratulated for following up on a good programme.

“The point I want to amplify is that we should all appreciate and congratulate Governor Obaseki for sustaining the tradition because there were a number of people who thought that once Comrade Oshiomhole was out of office, the Okpekpe race would be out of the way. What Governor Obaseki has done by coming here and by his own participation as a runner is to give affirmative action to our commitment to continue with the things that are good. I am happy the race has already outlived my tenure,” Oshiomhole said.

Oshiomhole insists one of the best things that happened during his tenure was the staging of the Okpekpe race which not only brought the rusty Okpekpe clan and the entire North Ibie on the map of the world, but also for its health benefit.

“We need to encourage our people that we can save a lot on medication through exercises rather than going to take blood pressure and cholesterol tablets.”

He added that the race had boosted the economy of the state, especially that of the Etsako East local government where Okpekpe is situated.

“Hotels were fully booked for about a week and there were lots of commercial activities that went on. Through the race the people of Okpekpe and near-by towns and villages have been effectively connected and integrated to the world sporting environment by seeing athletes from all around the world, especially the African continent, coming to compete in Okpekpe. They don’t need to go to Benin or Lagos or Abuja to, for instance to behold the Honourable Minister of Sports who is here with us courtesy of the race.”

Ethiopian duo of Leul Gebriesialse, runner-up at the 2015 edition, and Gabru Azemra, 2011 African junior 3000m champion emerged the winners of the men and women’s titles and won the accompanying $15,000 top prize.