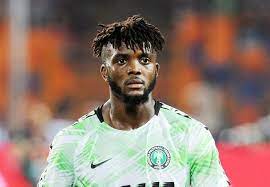 The Nigeria Football Federation confirmed on Monday that CSKA Moscow player Chidera Ejuke was the first player of the invited 22 to report for 2022 World Cup qualifier against Central African Republic at the Teslim Balogun Stadium. The match is billed for Thursday.

Ejuke played in Saturday’s goalless draw against Krasnodar after his slight injury a week earlier.

Nigeria manager Gernot Rohr will face the Central Africans without Wilfred Ndidi, Oghenekaro Etebo, Alex Iwobi and Terem Moffi who have all withdrawn from the match because of injuries. Henry Onyekuru who had been pencilled for a late call up could no longer be drafted as a late replacement for Iwobi after suffering a fracture in training before Olympiakos’ Super League clash against Panathinaikos.

Nigeria could still beat the visitors without these injured players when they meet on Thursday. The return leg in Douala, Cameroon though could be a little bit tricky. The Cameroonian city is serving as home ground for CAR now due to Covid-19 and security challenges.