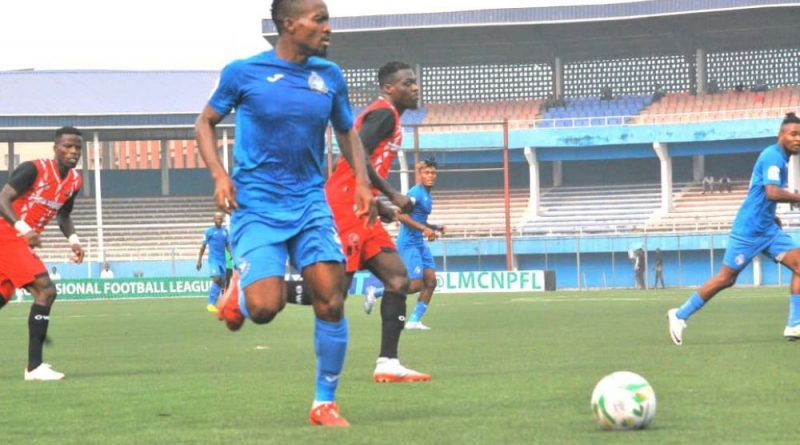 Enyimba produced another spectacular performance with a convincing 3-0 win over Gombe United.

The Aba based team started the game lively from the 3rd minute, as Sadiq Abubakar’s pass found Victor Mbaoma close to the box, but the striker’s effort was saved by Gombe goalkeeper Kazeem Yekini.

Gombe however tried to respond early after conceding, as in the 11th minute, Somiala Bello had his cross from the right flank, shot off the bar, by Yusuf Abdulazeez.

Enyimba Victor Mbaoma scored his team’s second goal of the day in the 16th minute, after a fine interchange of passes between him and his strike partner, Emeka Obioma. It was his 11th goal of the season in the league for Enyimba.

Samuel Oyediji came close to getting a goal for Gombe United but his shot went inches wide in the 20th minute.

Enyimba’s third goal came in the 29th minute after Cyril Olisema benefited from a fine pass from Samuel Kalu and slotted past the Gombe goalkeeper.

The visitors kept pushing for a goal as Abba Maigari had his chance in the 31st minute, but his long range shot was saved by Enyimba Goalkeeper John Noble as Enyimba took a 3 goal lead at half time.

The second half started with Gombe United seeking for a respite, but couldn’t score as Abba Maigari , Ahmed Jimoh and Yusuf Abdulazeez missed glaring chances in the 55th , 61st and 65th minute from giving themselves a consolation.

Enyimba almost got a fourth goal in the 70th minute, after Victor Mbaoma met Yakubu  Bilal’s cross, but his shot at goal inches wide.

Gombe United Substitute Christian Innocent came close in the 68th minute, but his effort went wide, while Ahmed Jimoh’s shot went over the bar from a good position in the 78th minute.

Gombe United kept pushing for a goal stronger but failed to find a breakthrough again in the 80th minute.

Enyimba will be guests to Akwa United, while Gombe Utd will host Sunshine Stars of Akure on Matchday 27.

Speaking to www.nfpl.ng Finidi George said his team played well especially in the first half.

“We had a good game today against Gombe United, especially in the first 45 minutes as we scored early goals before 30 minutes, it’s still work in progress as we seek to finish the season on a high note”

His opposite on the dugout, Aliyu Zubiaru blamed the defeat on his player’s loss of concentration.

“We lost to a better Enyimba team, as we couldn’t take the game to Enyimba, and conceded early goals which made it difficult to come back, but we will make amends in our next game at home”.