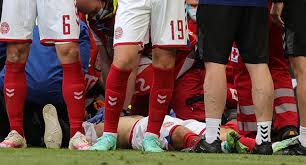 The former Spurs midfielder, 29, received CPR as he was surrounded by distraught team-mates after collapsing during the game against Finland on Saturday.

The SunSport reports that the medical staff raced onto the pitch to give emergency treatment to the Inter Milan ace as his team-mates formed a protective shield around him.

And speaking at a press conference on Sunday afternoon, Denmark team doctor Morten Boesen said: “We don’t have an explanation for what happened.

“I didn’t see it live, I saw it on the screen after it happened.

“It was a cardiac arrest. He was gone and we did cardiac resuscitation.

“How close were we? I don’t know. We got him back after 1 defib. That’s quite fast. The details, I’m not a cardiologist, so I will leave to the experts.”

Boesen added: “When I got to him he was on his side, he was breathing, I could feel a pulse, but suddenly that changed and we started to give him CPR.

“The help came really fast from the medical team and the rest of the staff with their co-operation, and we did what we had to do and managed to get Christian back.”

Denmark’s captain Simon Kjaer was hailed as a “hero” after placing Eriksen in the recovery position while unconscious and giving CPR to his friend before medics arrived.

Eriksen was seen conscious and sitting up on a stretcher while receiving oxygen as he was taken from the pitch just after 6pm.

It was reported that he had a Facetime call with his Denmark team-mates and asked them to play the remainder of the match.

Danish players received professional help after the trauma of seeing their team-mate collapse.

Denmark released an update on Eriksen’s condition on Sunday morning on their Twitter page.

It read: “This morning we have spoken to Christian Eriksen, who has sent his greetings to his teammates.

“His condition is stable, and he continues to be hospitalised for further examination.

“The team and staff of the national team has received crisis assistance and will continue to be there for each other after yesterday’s incident.

“We would like to thank everyone for the heartfelt greetings to Christian Eriksen from fans, players, the Royal Families from both Denmark and England, international associations, club etc.

“We encourage everyone to send their greetings to the Danish FA, where will make sure they are all passed on to Christian and his family.”

The shocking scenes happened towards the end of the first half of the teams’ opening Group B match, with Eriksen receiving 13 minutes of medical treatment.

Following the distressing incident the match was abandoned, but was restarted at 7.30PM (GMT), with Finland winning 1-0.

Denmark manager Kasper Hjulmand was critical of the decision to resume the match and says his players were put in a ‘tough’ position.