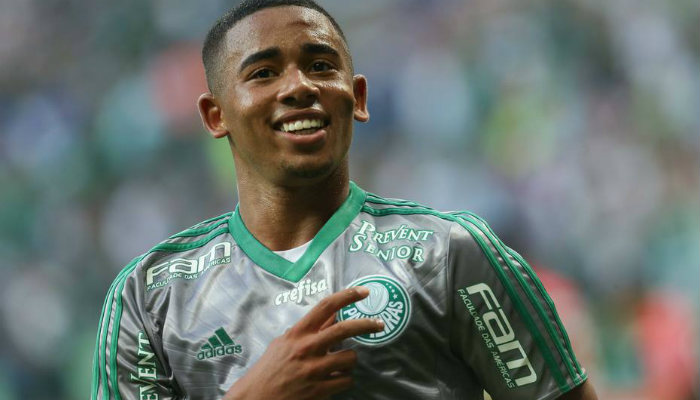 Considered a saint by fans of Palmeiras and hailed by Brazilian superstar Ronaldo as his successor, teenage sensation Gabriel Jesus arrives at Manchester City with a skyrocketing reputation.

He went out with a bang, inspiring Palmeiras to a first league title in 22 years, winning Olympic gold with Brazil in Rio de Janeiro and scoring five goals in his first six international games.

None of it, however, has come as a surprise to Jose Francisco Mamede, coach at Jesus’s first club, the Pequeninos do Meio Ambiente de Sao Paulo.

“Gabriel came from a very poor neighbourhood and that’s why he’s not afraid,” says Mamede, 58.

“He will adapt to the food, to the cold in Manchester and everything else. In three years he’ll win the Ballon d’Or, because Messi will already be getting a bit old.”

Guardiola, who dined with Jesus and his new Brazilian team-mates Fernando and Fernandinho in Manchester in December, has backed the youngster to make a major impact at the Etihad Stadium.

“When the ball is there, it’s a goal,” Guardiola said in August. “He has the sense of goal. So we buy goals.”

Jesus’s explosive emergence has brought to mind the prodigious feats of Neymar and Robinho, both of whom burst onto the scene as teenagers in Sao Paulo, albeit at rival club Santos.

His precocity was apparent from the beginning.

“From the very first training session, we saw he was different,” says Mamede, whose office is full of souvenirs of the young Jesus.

“He never lacked anything. He’d be the first to do the exercises. He was always determined to be a professional.”