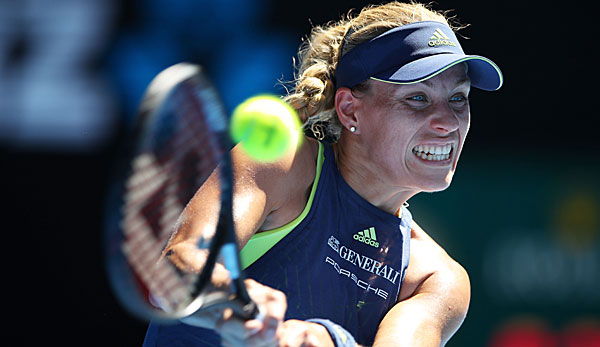 Defending champion Roger Federer eased through to the Australian Open quarter-finals with a straight-set win over Hungary’s Marton Fucsovics.

Second seed Federer, 36, will face Czech Tomas Berdych in the last eight, who he beat in last year’s third round.

“I am sure he wants to make me pay for that one,” said Federer.

“I saw his matches, he is standing up hitting big shots and I am glad he’s back.”

The Swiss was in superb form on Rod Laver Arena, playing in the day session for the first time in 2018, as he made quick work of Fucsovics to win in two hours, one minute.

“Playing at night, going to bed at 3am, is a different rhythm to playing in the day time,” he added.

It took Federer four break points to earn an advantage in the first set, before taking the second on a tie-break.

But the five-time Australian Open winner broke early in the third and followed up with another break of serve to set up a repeat of last year’s third round.

In the women’s open Kerber battled back against world number 88 Hsieh Su-wei.

Kerber, the favourite for the title following her convincing win over Maria Sharapova in round three, recovered from a set down to win 4-6 7-5 6-2.

The 30-year-old German and 21st seed is the last remaining Grand slam champion in the women’s singles draw.

She will play American 17th seed Madison Keys in the last eight.

Despite breaking serve in the first game, 2016 champion Kerber struggled in the first half of the match as the unconventional Hsieh, who plays with a double-handed backhand and forehand, hit 20 winners in the first set alone.

Hsieh knocked out third seed Garbine Muguruza and 26th seed Agnieszka Radwanska in previous rounds and looked on course for a first Grand Slam quarter-final until Kerber improved late in the second set.

Kerber served to stay in the match at 5-4 in the second set before winning the next two games to force a decider.

She took the final set in 32 minutes, the quickest of the match, to reach her first Slam quarter-final since winning the US Open in 2016.

“Credit to her, she played an unbelievable match,” Kerber said.

“I was running everywhere and she always had the answer. We will see a lot in 2018 from her.”

Keys, runner-up in the last Grand Slam of 2017 at the US Open, progressed with a crushing 6-3 6-2 victory over French eighth Caroline Garcia.

“It will be another tough match but I will try to continue how I have played in the last week,” Kerber said. “I am feeling good.”